Matter is anything that has mass and occupies space.

Matter is anything that has weight/ mass and occupies space/ volume. Naturally, there are basically three states of matter.

A solid is made up of particles which are very closely packed. It thus has a definite/fixed shape and fixed/definite volume /occupies definite space. It has a very high density.

A liquid is made up of particles which have some degree of freedom. It thus has no definite/fixed shape. It takes the shape of the container it is put. A liquid has fixed/definite volume/occupies definite space.

A gas is made up of particles free from each other. It thus has no definite/fixed shape. It takes the shape of the container it is put. It has no fixed/definite volume/occupies every space in a container.

A mixture is a combination of two or more substances that can be separated by physical means. Simple methods of separating mixtures at basic chemistry level include:

A drug is a substance which is used as medicine or in a medicine. Some drugs occur naturally in some plants and animals or are man-made.

Drugs are administered in specified dosages as prescribed by a medical doctor. When an overdose or underdose of a drug is administered or when a drug is used for a purpose which it is not meant for, the condition is reffered to as drug abuse. Drug abuse has harmful effects on the state of health of the user.

The following are some of the drugs that are mostly abused which are also very addictive.

The images shows the hard drugs that are abused. These drugs are very addictive.

The image below shows cocaine in powder form 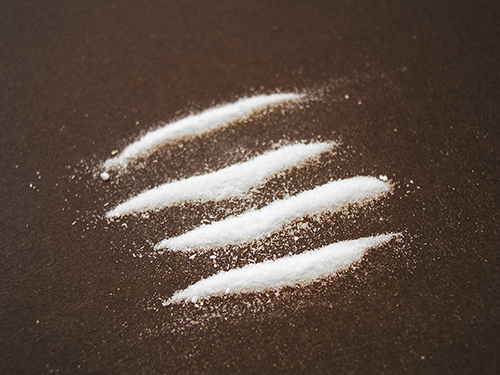 The image below shows heroin powder and how it is prepared for use. 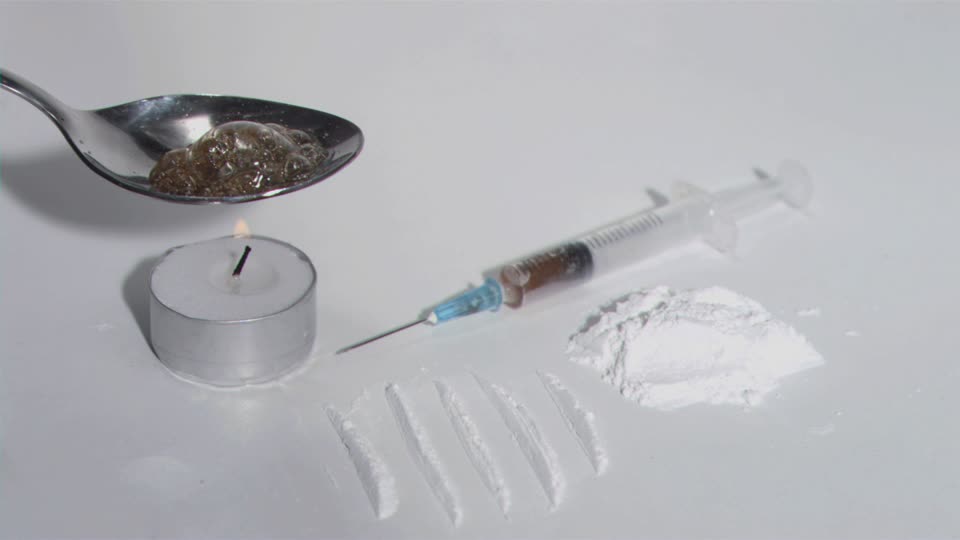 The image below shows the Cannabis sativa plant 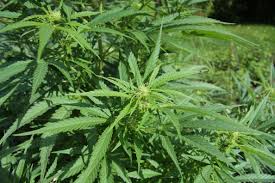 Chemistry is a branch of science in which the composition and properties of matter are studied.

The Role of Chemistry in the Society

Outside, a calibration /graduation correspond to this expansion and thus changes in temperature.

The stop watch/clock is the standard apparatus for measuring time. Time is measured using hours, minutes and second. Common school stop watch/clock has start, stop and reset button for determining time for a chemical reaction. This requires practice. 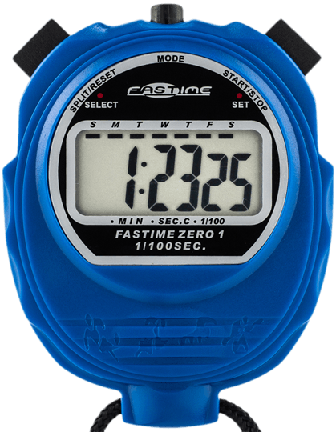 Apparatus for putting liquids/solid for heating.

The bunsen burner consists of three major parts. These are the chimney or barrel or tube, the collar and the base.

The image below shows parts of a bunsen burner 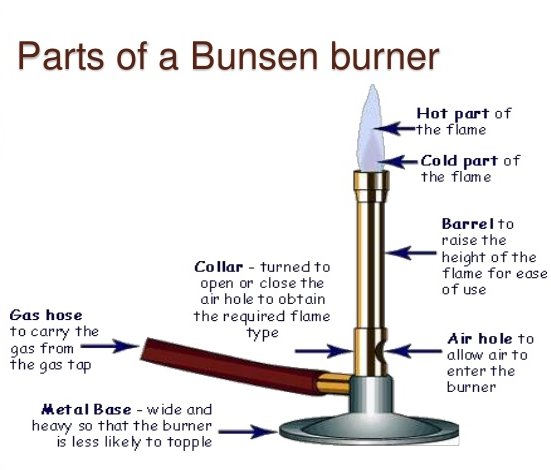 The chimney is a hollow metallic cylinder with an air hole near its lower end. The collar is a metal ring with an air hole whose diameter is the same size as that of the hole in the chimney. The diameter of the collar is slightly bigger than that of the chimney so that the chimney can just fit into it. The base is made up of thick metallic material into which a small hollow metal with a jet is fitted. The bunsen burner is normally connected to an external source of laboratory gas by rubber tubing.

Funtions of the Different Parts of the Bunsen Burner

When in use, a Bunsen burner produces two types of flames depending on the amount of air allowed into the chimney.

The image below shows the two types of flame

Image (a)is non-luminous while (b) is luminous 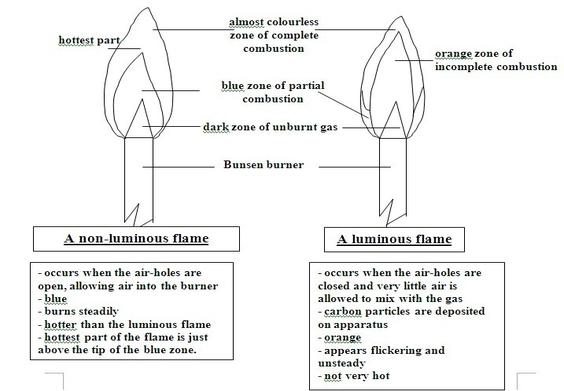 Safety in the Laboratory

The laboratory should always be clean, neat and with ample lighting. 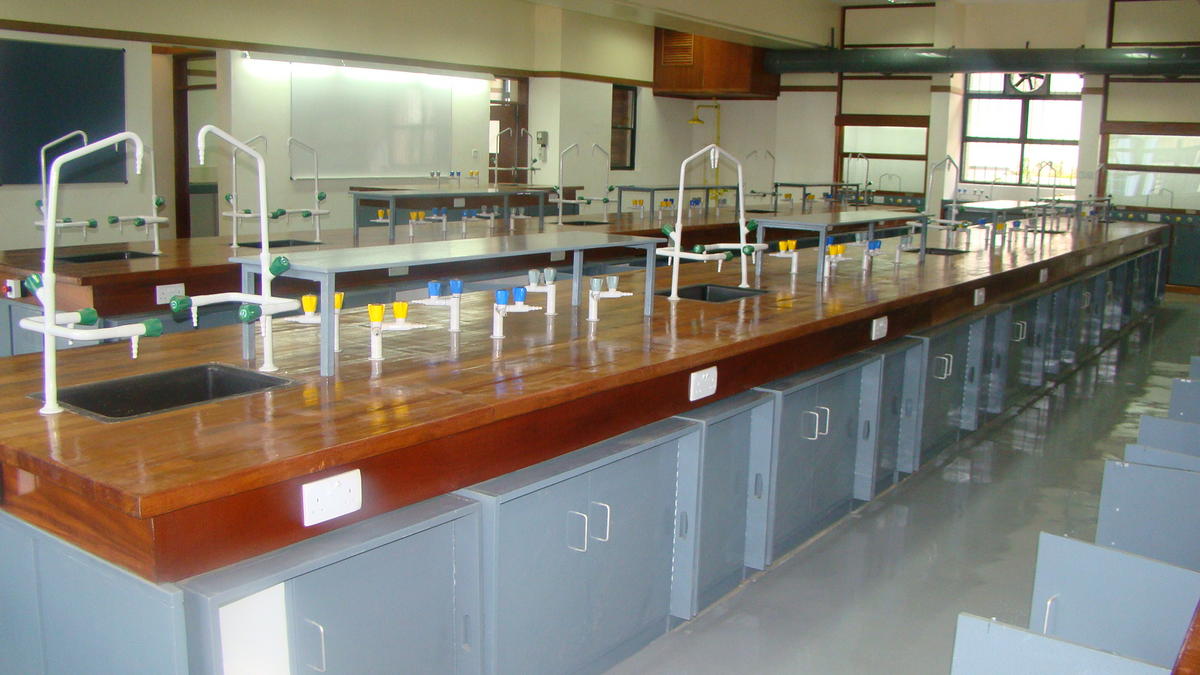 When carrying out an experiment in the laboratory, it should be considered as potentially dangerous. All chemicals and apparatus should be handled with care. For example, if a piece of glass apparatus is handled carelessly, it may break and harm the user.

Since learning Chemistry emphasizes on practical work, it is necessary that certain rules are followed to ensure safety in the chemistry laboratory. The common causes of accidents in the laboratory are carelessness and ignorance. Accidents are minimised when the laboratory safety rules are observed.