A mixture is a combination of two or more pure substances which can be separated by physical means. The three states of matter in nature appear mainly as mixtures of one with the other.
Common mixtures include:

Put about 100 cm3 of water in three separate beakers. Separately place a half spatula end full of copper (II) sulphate (VI), Potassium manganate (VII) and sodium chloride crystals to each beaker. Stir for about two minutes. 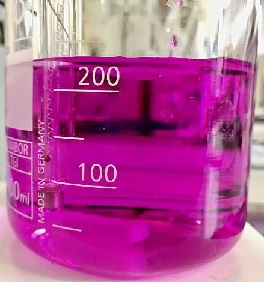 Some solids, liquids and gases dissolve in some other liquids.

A substance/liquid in which another substance dissolves is called solvent.

A substance /solid /gas which dissolves in a solvent is called solute.

When a solute dissolves in a solvent it forms a uniform mixture called solution.

A solute dissolved in water as the solvent exists in another state of matter called aqueous state. Water is referred as the universal solvent because it dissolves many solutes. A solute that dissolves in a solvent is said to be soluble. Soluble particles uniformly spread between the particles of water/solvent and cannot be seen.

The solute dissolved in water gives the name of the solution e.g.

b) Suspension/ precipitates/solid-liquid mixture which do not dissolve

Procedure
Put about 100 cm3 of water in three separate beakers. Separately place a half spatula end full of soil, maize and lead (II) Iodide to each beaker. Stir for about two minutes.

Some soil, maize and lead (II) Iodide float in the water 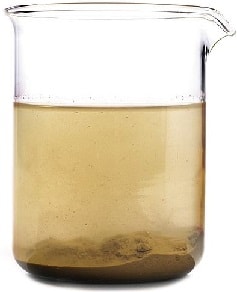 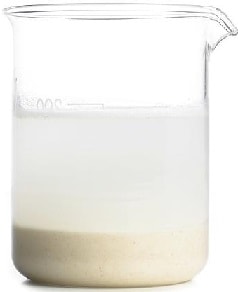 A yellow suspension/precipitate/particles suspended in water containing Lead (II) iodide. Some soil, maize and lead (II) Iodide settle at the bottom after some time.

Some solid substances do not dissolve in a liquid. They are said to be insoluble in the solvent. When an insoluble solid is put in liquid:

An insoluble solid acquire the colour of the suspension/precipitate .e.g.

Mixtures can be separated from applying the following methods:

Sediments can be separated from a liquid by pouring out the liquid. This process is called decantation.

Put some sand in a beaker. Add about 200cm3 of water. Allow sand to settle. Pour off water carefully into another beaker.

Sand settles at the bottom as sediments. Less clean water is poured out.

Sand does not dissolve in water. Sand is denser than water and thus settles at the bottom as sediment. When poured out, the less dense water flows out.

Fold a filter paper to fit well into a filter funnel. Place the funnel in an empty 250 cm3 beaker. Put one spatula end full of soil into 50cm3 of water. Stir. Put the soil/water mixture into the filter funnel.

Clean water is collected below the filter funnel. Soil remains above the filter paper.

In industries, filtration is used in engine filters to clean up air.

Evaporation is a method of separating a solute/solid from its solution. This involves heating a solution (solvent and solute) to vapourize the solvent out of the solution mixture leaving pure solute/solid. If a mixture contain insoluble solid, they are filtered out.

To separate a mixture of soil and salt (sodium chloride).

Solid mixture of sand and common salt take the colors of the two. On adding water, common salt dissolves to form a solution.

Soil does not because it is insoluble in water and thus forms a suspension. On filtration, a residue of insoluble soil does not pass through the filter paper. It is collected as residue.

Common salt solution is collected as filtrate. On heating the filtrate, the solvent/water evaporate/vaporize out of the evaporating dish leaving common salt
crystals.

Vapourization/evaporation can take place even without heating. This is the principle/process of drying wet clothes on the hanging line. 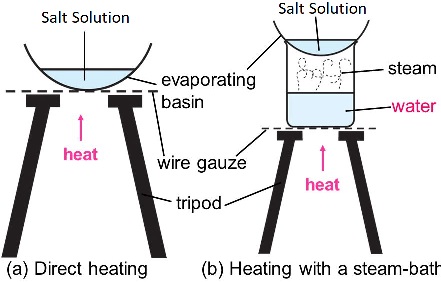 It involves heating the solution to evaporate/vaporize the solvent out. The solvent vapour is then condensed back to a liquid.

Copper (II) sulphate (VI) crystals dissolve in water to form a blue solution. On heating, colourless liquid is collected in the receiver.
Blue crystals are left in the flask.

The Liebig condenser has a cold water inlet near the receiver and cold water out let. This ensures efficient cooling. If the cold water outlet/inlet is reversed, the water circulation would be less
efficient.

The water in the receiver would be warm. In the Liebig condenser, the cold water condenses the liquid vapour into liquid.

The condensed liquid collects in the receiver as distillate.

The solute of blue Copper (II) sulphate (VI) crystals is left in the flask as residue.

During simple distillation, therefore, the solution is heated to vaporize /evaporate the solvent/one component which is condensed at a different part of the apparatus.

The purpose of pieces of broken porcelain/porous pot/glass/sand/ is to:

Salty sea water can be made pure through simple distillation.

Any mixture with a large difference 40oC in boiling point can be separated using simple distillation. 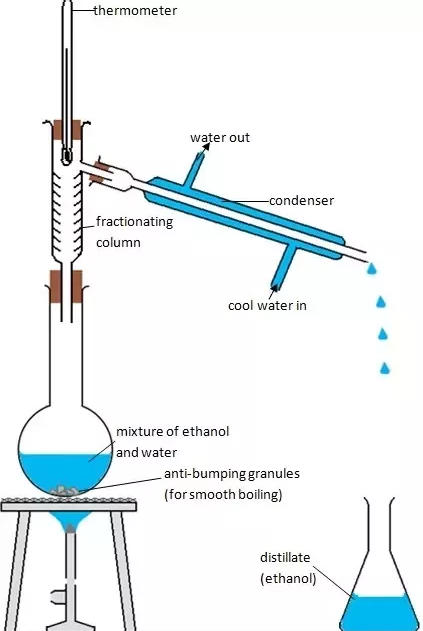 On a large scale,fractional distillation is used:

Two or more liquids that form layers on mixing are immiscible. Immiscible mixture arrange themselves according to their densities i.e. The denser liquid sink to the bottom. The less dense liquid floats on the denser one.

Immicible mixtures can be separated from each other by using a separating funnel.

To separate an immiscible mixture of paraffin and water.

Water and paraffin are both colourless liquids.

Two layers are formed on mixing.

Colourless odorless liquid collected first. It does not catch fire.

A colourless liquid with characteristic smell collected later/second. It catches fire and burn with a yellow smoky flame.

Water and paraffin are immiscible. Water is denser than paraffin. When put in a separating funnel, paraffin float on water.

On opening the tap, water runs out. A mixture of water and paraffin at the junction of the two is discarded. It is not pure. 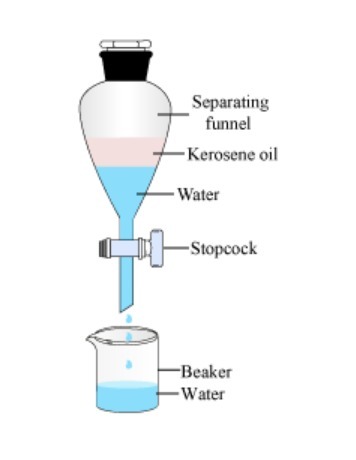 Some solids on heating do not melt to a liquid but change directly to a gas. The process by which a solid changes to a gas is called sublimation . The gas cools back and changes directly to a solid.

The process by which a gas changes to a solid is called deposition. Sublimation and deposition therefore are the same but opposite processes.

Some common substances that undergo sublimation/ deposition include:

If a mixture has any of the above as a component, then on heating it will change to a gas and be deposited away from the source of heating.

Set up of apparatus: 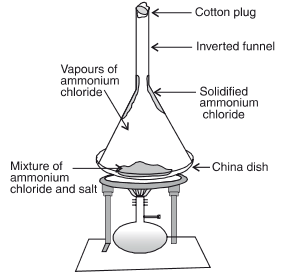 Chromatography is a method of separating components of a solution mixture by passing it through a medium where the different components move at different rates.

The medium through which the solution mixture is passed is called absorbent material.

Paper chromatography is a method of separating colored dyes by using paper as the absorbent material.

Since dyes are insoluble/do not dissolve in water, ethanol and propanone are used as suitable solvents for dissolving the dye. Practically, a simple paper chromatography involve placing a dye/material on the absorbent material, adding slowly a suitable soluble solvent on the dye/material using a dropper, the solvent spread out on the absorbent material carrying the soluble dye away from the origin.

The spot on which the dye is initially/originally placed is called baseline. The farthest point the solvent spread is called solvent front.

The farthest a dye can be spread by the solvent depend on:

When a drop of ink is placed on an absorbent material it sticks. On adding an eluting solvent, it dissolves the dye spread out with it.

A pure dye will produce the same chromatogram/spot if the same eluting solvent is used on the same absorbent material.

Comparing the distance moved by a pure dye with a mixture, the coloured dyes in a mixture can be deduced as below:

The chromatogram of pure dyes A, B ,C and a dye mixture D is shown below Determine the pure dyes present in D. On the diagram show: 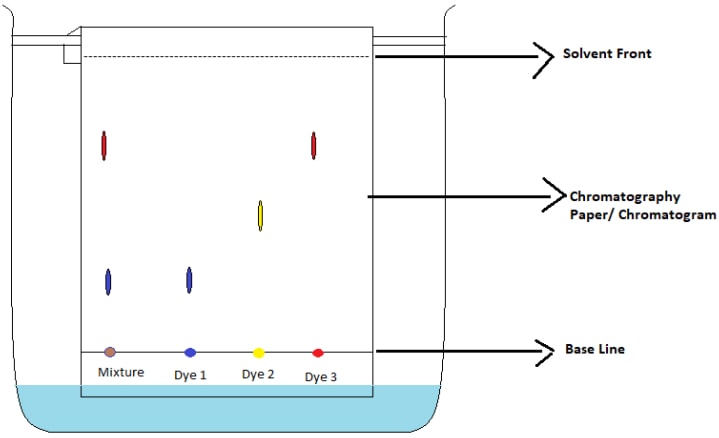 Solvent extraction is a method of separating oil from nuts/seeds. Most nuts contain oil. First the nuts are crushed to reduce their size and increase the surface area. A suitable volatile solvent is added. The mixture is filtered. The filtrate solvent is then allowed to crystallize leaving the oil/fat. If a filter paper is rubbed/smeared with the oil/fat, it becomes translucent. This is the test for the presence of oil/fat.

Any seed like corn, wheat, rice, soya bean may be used instead of macadamia seed. When oil/fat is rubbed/ smeared on an opaque paper, it becomes translucent.

Crystallization is the process of using solubility of a solute/solid to obtain the solute/solid crystals from a saturated solution by cooling or heating the solution.

A crystal is the smallest regular shaped particle of a solute. Every solute has unique shape of its crystals. Some solutions form crystals when heated. This is because less solute dissolves at higher temperature.

Some other solutions form crystals when cooled. This is because less solute dissolves at lower temperature.

If the mixture is heated to dryness, small crystals are formed.

A physical/temporary change is one which no new substance is formed and is reversible back to original.

A chemical/permanent change is one which a new substance is formed and is irreversible back to original.

Plot a graph of time against Temperature (y-axes)

Explain the shape of your graph

Melting/freezing/fusion/solidification and boiling /vaporization /evaporation are the two physical processes.

Melting/fusion is the physical change of a solid to liquid.

Freezing is the physical change of a liquid to solid.

Boiling/vaporization/evaporation is the physical change of a liquid to gas.

Condensation/ liquidification is the physical change of gas to liquid.

Examples of Physical and Chemical Processes