Comparing the Strength of Acids

Role of Solvents on Acidic Properties of a Solute

Experiment: - to find out if solutions of HCl in different solvents display acidic properties

Strength of an Alkali

Measuring the Strength of Alkalis

Effects of Type of Solvent on the Properties of Ammonium Solution

Uses of Acids and Bases

Solubility of salts: - a summary

Effects of Heat on Metal Hydroxides

Useful Information on Salts (Qualitative Analysis)
Colours of substances in solids and solutions in water.

What to look for when a substance is heated.

Experiment: To determine the Solubility of Potassium Nitrate at 20oC. 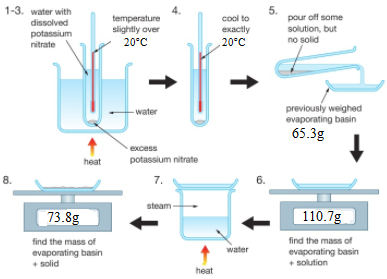 Removal of temporary hardness in water:

Click here to download the pdf version of "ACIDS, BASES AND SALTS - Form 4 Chemistry notes", and read the full contents of this page

CLICK HERE to get "ACIDS, BASES AND SALTS - Form 4 Chemistry notes" on Whatsapp