Definition of a Computer:

- There are two types/forms of data:

Comparison between Data and Information.

- Before 20th century, most information was processed manually or by use of simple machines.
- Today, millions of people are using computers in offices and at home to produce and store all types of information
- The following are some of the attributes that make computers widely accepted & used in the dayto-day activities in our society:

9. Imposition of a formal approach to working methods:

Parts of a Computer.

- There are two makes of System units: 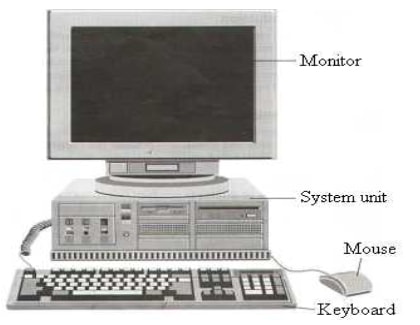 Features of the System unit.

- This is the brain of the computer, and carries out all the processing within the computer.

Factors that Determine the Type of Computer.

- Computers can be classified according to the following factors:

Classification According to Physical Size.

- Computers can be classified into 5 main groups according to their size as:

Areas where supercomputers are used:

Areas where mainframe computers are used:

Areas where minicomputers are used:

Areas where microcomputers are used:

Microcomputers have become very popular because of the following reasons:

Note. The smaller computers like Laptops tend to be more expensive than Desktop computers because of the following reasons:

Classification According to Purpose.

Reasons why a Mobile phone is regarded to be a computer.

Classification According to Functionality.

In a hospital Intensive Care Unit, an analogue device may be used to measure the functioning of a patient’s heart, temperature and other vital signs. These measurements may then be converted into numbers and send to a digital device, which may send an immediate signal to the nurses’ station if any abnormal readings are detected.

Comparison between a Computer and Calculator.

- Computers have many advantages over other types of office and business equipments that are used for data processing functions. Some of the advantages are:

Areas Where Computers are Used.

- The following are some of the areas where computers are used:

Factors to Consider When Preparing a Computer Laboratory.

- The following factors must be considered when preparing a computer laboratory:

Requirements of a Computer Laboratory.

1. Behaviour in the Computer Laboratory.

- The following rules must be followed in and around a computer laboratory.

2. Protection Against Fire And Accidents.

- Computers are delicate devices that require a stable source of power.

Functions of the UPS

- Both computers and human beings emit heat energy into the environment. Therefore, the computer room must have good circulation of air to avoid overheating and suffocation.
- Proper ventilation enables the computers to cool, and therefore, avoids damaging the electronic parts.
- The following facilities can ensure proper ventilation in a room:

- Computer devices must be handled with a lot of care as they are extremely fragile and can easily get damaged. Dropping or bumping can cause permanent damage on the device, e.g., to transport the System unit always handle it on its frame.

- Floppy disks are used to store data, and if properly taken care of, they reduce the likelihood of destroyed or corrupted data.
- Note. Data is very difficult & expensive to reconstruct, unlike application software, which can easily be re-loaded.

- There are 2 types of booting, namely;

Shutting Down a Computer.

- After finishing working with the computer, the user must follow the correct procedure of shutting down the computer in order to ensure that loss of data, damage of programs and computer components does not occur.

- To turn off any computer running Windows operating systems:

Sections of The Keyboard.

- Most Keyboards have a total of 101 keys, which are divided into 5 different groups: -

- This special key works in combination with other keys.

Each of these symbols is used differently depending on what program you are running.

- When using the keyboard, observe the following typing rules: 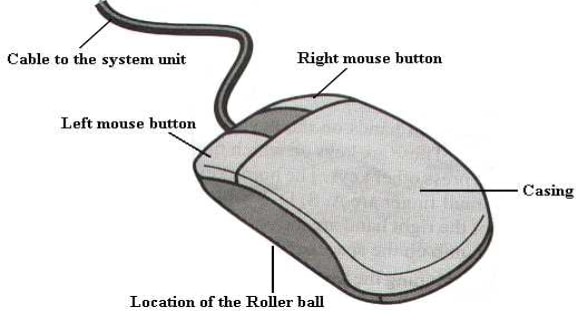 Terminologies associated with the use of a Mouse.

To move an item on the screen by dragging;