Read the passage below. It contains blank spaces numbered 1-15. For each blank space choose the BEST answer from the choices given 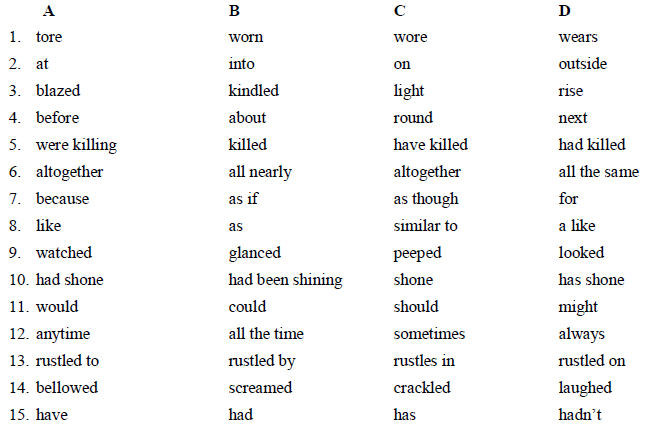 In questions 16 to 18 choose the best alternative

Choose the most suitable choice to complete question 19-20

Read the following passage and then answer questions 26 - 38

A long time ago a one-eyed lion who was thought to be the oldest of the animals, prophesied that there was going to be a serious drought in the jungle. He advised other animal to fill their silos with food in preparation. He said only the hardworking would survive the prolonged drought. On hearing the news, the hyena laughed dismissing it as a silly joke. Other animals heeded the advice. Both the young and old went about looking for food. Some built more than one silo to store enough food. And for sure signs of drought began to show within no time. It got
scorching hot, rivers dried, trees were bare with no leaves.

Among all the animals the one who suffered most was the lazy hyena. He had ignored the advice and now it was his time to feel the effects. There was hardly a morsel to eat. An elderly elephant, who was as old as the one-eyed lion, brought even worse news. The news stated that those who had exhausted their food had better migrate to other areas since that was the worst drought he had seen in a hundred years. "You know, I have survived several droughts but this one is the mother of all and we are not sure when it will end, he said.

The hyena cried in desperation but what was he to do. He had earlier on chosen to watch as others toiled. One day as he was walking in the forest he decided to rest under a tree as he thought what to do next. Then he looked up and saw a huge chunk of meat hanging from a branch. The meat belonged to the crow. The foolish hyena laughed so loudly thinking his problems had come to an end. "Oh, How lucky I am," he sang. Sooner or later he realized he could hardly get hold of the chunk of meat. He tried to jump and hop with no success. Then he started crying on realizing how hard it was to get food. He got too weak and could not walk any more. He died under the tree. Other animals had something to eat even as the drought came to an end. Poor hyena! laziness is a killer disease!

Read the following passage and then answer questions 39-50

When some people cut down trees they often do not stop to think what harm they are doing to themselves and others. Just think for a moment how the world would look like without trees. It would be an empty, ugly place. But trees are not valued for beauty only. Through them we are able to get enough oxygen. Human beings cannot live without oxygen. We breath out a lot of carbon dioxide all the time. Carbon dioxide is harmful to human beings. This is when trees come in to help us. It is through them that we are able to get enough oxygen. Their
leaves purify the air around us by taking in carbon dioxide and giving us oxygen.

Rain is very important to all forms of life on earth. Without trees, there would be much less rain for us. The roots of trees pull water from deep down the ground and send it into the air through the leaves. This is the moisture that then collects together until there are enough rain clouds.

On a hot day people love to shelter under trees. At a time like that the trees give some welcome shade from the sun. Trees also protect the soil from the harmful effects of heavy rain and the hot sun.

When leaves from trees fall to the ground, they provide a protective cover to the soil. When they rot, they become humus which makes the soil rich. Trees offer shelter to many birds and animals like monkeys, squirrels and lizards. And if there were no trees, giraffes and elephants would have nothing to eat.

Some of the commonest products we get from trees is paper and timber. The uses of timber are numerous. We can immediately think of house construction and furniture. We also use wood for fencing and for electricity and telephone poles. Furthermore, there are many people who depend on firewood and charcoal for cooking and for
warming themselves. As for paper, one need not look far to see its importance in our lives.

Unfortunately, although trees and forests are so important, human beings have continued to cut them down. No wonder forests are becoming fewer and fewer. The result is that the land is left bare and ugly. The soil is unprotected from the strong rays of the sun and the moisture is lost. Soil erosion too increases because the ground is bare. If this goes on for a long time the land could easily become a desert.

To stop this, we should do a number of things. First we should stop cutting down trees carelessly. Second, we should try and prevent forest fires. Finally, we should actively plant trees instead of simply just talking about the importance of trees.

Write an interesting story beginning with the sentence given. Make your story as interesting as possible.