Click the link below to download the full Geography Form 4 Notes pdf document, with all the topics.

- The act of catching fish and other aquatic animals.

- Fisheries are fishing grounds or areas where water resources such as fish, seals, clubs, whales, etc. are exploited.

- Large shoals of fish are found in shallow waters of lakes and seas where there is plenty of plankton. They thrive where depth of waters less than 180 m deep because it is up to where suns rays can reach.

Nature of the Coastline

- There is more fish on coasts with sheltered inlets and estuaries because of calm water and shelter from natural enemies like predators e.g. Fiords of Norway.

- People in some countries engage in fishing due to mountainous landscape which hinders other economic activities such as agriculture e.g. Japan, Norway and Alaska.

- In temperate regions there is more fish because there is cool waters which plankton requires to grow while in tropical lands there is less fish due to high temperatures resulting in warm waters which hinders plankton growth.

- There is plenty of fish in areas where warm and cold ocean currents meet because upwelling takes nutrients to the surface and improves the circulation of oxygen and cold ocean currents cool waters in tropical regions resulting in conducive conditions suitable for plankton thriving e.g. the coast of Namibia washed by the cold Benguela current.

- Fishing is intensively carried out in Europe, Asia and N. America due to labour availability as its labour intensive.

- Fishing is done extensively in highly populated and developed regions with a ready market because fish is a perishable commodity e.g. in Norway, Japan, China, etc.

- Fishing is extensively done in areas where there is a habit of eating fish e.g. Norway and Japan.

- Fishing is done extensively in countries with transport and refrigeration facilities because fish is perishable and has to be transported in refrigerated lorries and ship.

- Fishing is extensively done in developed countries because they can afford huge sums of money required for hiring labour force, buying fishing equipment and preservation facilities.

- Catching of fish which live close to the surface e.g. mackerel, menhaden, herring, sardines and tuna.

- Best method to catch pelagic fish is drifting and seining.

- Methods are trawling and long lining.

- Fishing close to the shores in shallow sheltered coastal waters and the lower stretches of rivers.

- Methods are line and drifting methods.

- Commonly practised in tropical areas along the African coast and the inland fisheries.

- Simple hand- made equipments are used.

- The methods are employed in small scale.

- A basket with a cone opening with bait inside is used.

- It is placed at the shallow end of the water.

- The fish are attracted by the bait.

- Fish run to hide in the basket get inside and are trapped.

- The catch is relatively small. 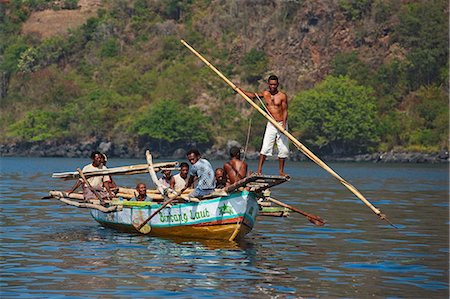 - Using a sharpened arrow or stick to strike Fish.

- One fish is caught at a time.

- Dangerous in waters infested with crocodiles and hippopotamuses.

- Using Barriers made of reeds or sticks to catch fish in flood waters.

- Are placed on the downstream side of a flooded region and when water levels drop the fishermen scoop the fish.

- Sprinkling crushed herbs in waters making fish to become unconscious then the fishermen collect fish from the river using hands.

Use of Lamp and Net

- Placing a lit lamp on the edge of the boat to attract fish. - Fish swim towards the light and are caught using net. 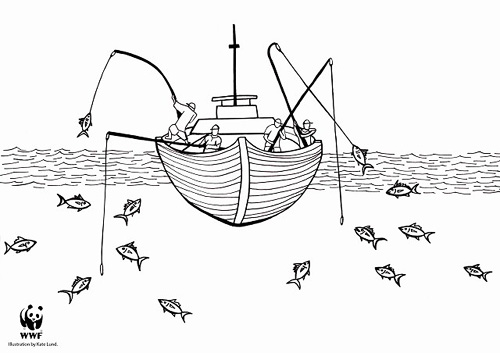 - Throwing a line with a baited hook into the water.

- The fish are attracted by the bait which they swallow together with the hook.

- The line is pooled from the water together with the fish. 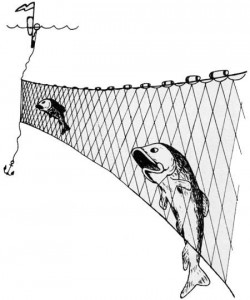 -Nets with mesh which lets only the head of a fish through and then traps it by the gills.

-They can be swerved across or round the river on the path of fish. 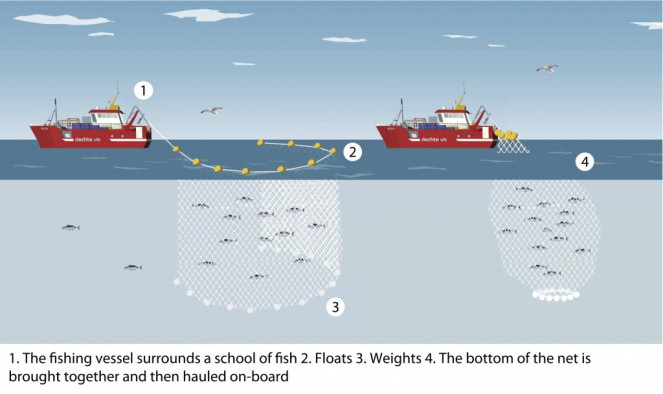 - Method is used to catch pelagic and anadromous/migratory fish which swim in shoals.

- A Bag like nets with small meshes (seine) attached to two boats on each end is cast into the sea.

- It's kept open and held in position by floats on top and weights at the bottom. - Fish move towards the net and get trapped.

- Leads to overfishing because it doesn't discriminate the ages of fish caught.

- A bag shaped net is attached to a trawler (ship) is is cast into deep waters - The upper part is kept open by floats and lower part kept down by weights.

- The net is dragged by the trawler along the sea bed.

- The trawl net sweeps in the fish.

- The net is hauled into the trawler and the fish is emptied onboard. 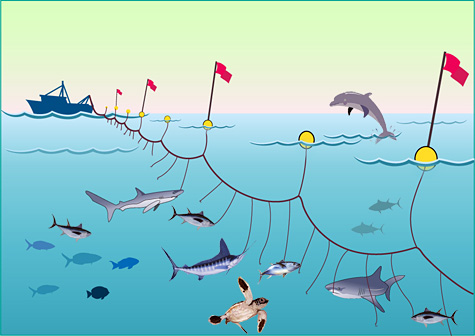 - The method is used to catch demersal fish.

- Fishing boats spread out long line with several baited hooks on them.

- Floats keep the lines suspended and also show the fishermen where the lines are.

- Baited hooks catch the fish as they compete to feed.

- Hooks are drawn and fish unhooked and put in refrigerated containers.

Distribution of Major Fishing Grounds in the World

- Located along the E. coast of N. America.

Factors That Have Led To High Development of Fishing

Factors That Have Led To High Development of Fishing

Located along the Coastland of Mauritania

Located in and Cape Province of S. Africa Namibia

Location is the coast of Peru.

Located along the W. Coast of N. America.

The main fish caught is salmon.

- Located along the coast of N.E. Asia.

- Stretches from Beijing southwards to China Sea in Japan, Malaysia and Indonesia.

- Carried off the coast of Kenya and Tanzania in the Indian Ocean.

- Uganda doesn't have marine fisheries because she is landlocked. Kenya and Tanzania

- Contributes only about 10% in Kenya and 13% of the total catch in Tanzania.

- Relatively warm waters of the tropics don't favour breeding of a large number of fish.

- Indian Ocean is warmer and hence has little plankton.

- They use simple tools.

- Fish caught include pelagic fish such as tuna, kingfish, mullet, bonito and sardines.

- Fishing is done in small scale for both subsistence and commercial purposes.

- In Kenya small boats and a few of them motorised without refrigerators are used while in Tanzania, fishermen use small rarely motorised dhows which are guided by trade winds which travel into deep sea.

- In Tanzania most of the coastal communities take part in fishing industry particularly in the islands of Mafia, Pemba and Zanzibar and along the coast around Tanga, Mtwara, and Dar-es-Salaam.

- Fish is more popular than beef in Pemba and Zanzibar.

Found in inland in lakes, rivers and ponds.

- Lakes are the main suppliers of fish and their resources are more exploited than those of the Indian Ocean because they are calm than seas enabling fishermen to reach deep areas where there is a large catch.

- The only alkaline lake containing fish is L. Turkana,

- Most fishermen use simple equipment but around L. Victoria trawlers are used.

- Many fishermen donât belong to a co-operative hence they sell their catch to the middlemen at minimal prices.

- The middlemen with refrigerated lorries transport the fish to urban centres where they make a huge profit while the rest of the fish is smoked, salted or sun dried and transported to local markets.

- The main species of fish is tilapia and others are herring, Nile perch and omena.

Factors Which Have Favoured Fishing in L.Victoria

- Rearing of fish in ponds where the farmer provides an environment conducive for the survival of fish.

- Fish ponds are built in areas with heavy clay or loamy soils which are usually impervious.

- The ponds must be located near a river to ensure a steady supply of water to ensure the water remains fresh providing natural environment for fish.

- After establishing a pod the farmer gets fingerings from hatcheries set up at Sagana, Kabaru, Kibos, and Aruba and put them in the pond.

- The main types of fish kept are tilapias which are more popular because they breed fast, are resistant to diseases and can survive in different environments, trout suited to cool areas such as the slopes of Mt. Kenya and mudfish.

- Some plants are grown in the pod to provide oxygen.

More intensive than in Kenya and Uganda.

- There are many fishermen who use modern techniques and equipment.

- Fishing boats are large and carry large stocks of fish which enables fishermen to travel deep into the lake where there is more fish.

- The neighbourhood of the lake is densely populated with large towns as Bukoba, Mwanza and Musoma which provide a ready market and processing facilities for the fish.

- Lack of well developed transport limits the marketing of fish to the interior towns.

- deep and is the richest in the region in fish.

- Fishing has been an old tradition of the people living around the lake.

- The main type of fish caught is dagaa usually caught at night when attracted by light using special nets with small meshes.

- The factory at Kigoma preserves and processes fish for sale to other parts of the country while some of the fish is smoked or dried and exported to Zambia.

- Fishing is concentrated along the shore because rough storms discourage fishermen from going far into the lake.

- Sparse population around the lake doest offer a ready market for fish but the large surplus is transported by rail to other parts of the country.

- Rukwaâs biggest problem is fluctuation of water levels which affect survival of fish.

- A section of L. Malawi is in Tanzania enabling Tanzanian fishermen to catch a lot of fish which is dried and sold in the southern districts of Mbeya and Songea.

- Fishing industry has been interrupted by a long civil strive in the country reducing it to a subsistence economy.

- L.Victoria is the main fishing ground.

- Many fishermen own motorised boats enabling them to travel deep into the lake and catch a lot of fish.

- The fishermen sell their fish to co-operatives which organise processing and marketing.

- The dense population around such as in major towns of Entebbe, Kampala and Njinja provide a ready market for fish.

- Fish is also dried and sold in other parts of Uganda.

- Fish is popular as a diet of majority of Ugandans.

- There are fish processing factories in Njinja where fish is filleted.

Significance of the Fishing Industry in Kenya

Problems Facing Fishing Industry in Kenya and Their Possible Solutions

- The leading fishing nation producing 1/6 of the worldâs fish output.

Factors Making It to Be the Leading Nation

Comparison between Fishing in Kenya and Japan

- Both countries carry out inland and marine fishing activities.

- There is overexploitation of fish resources in both countries.

- There is fish farming in both countries to supplement natural fisheries.

- Both countries experience the problem of pollution whereby in Kenya itâs by industrial effluents and agricultural chemicals and in Japan by industries dumping mercury into the sea.

- Modern methods of preserving and processing fish such as refrigerated vessels and fish filleting are used in both countries.

- Fish is consumed locally and exported in both countries.

- In both countries fishermen have organised themselves into co-operatives.

- In both countries fishing faces the problem of restriction e.g. in japan by Korean Government while in Kenya they are restricted from Ugandan and Tanzanian waters.

- In Kenya fishing is carried a few kilometres off the shore but in japan it is done in deep seas even far beyond their territorial waters.

- In Kenya there is low demand for fish than in Japan.

- In japan the fish species caught are cod, Mackerel, Alaska Pollack while in Kenya it is Tilapia, Nile Perch Dagaa and black bass.

- In Japan marketing of fish is done mainly by co-operatives while in Kenya itâs mainly done by individual fishermen although there are few co-operatives.

- Marine fishing in Kenya faces competition from other countries such as Japan and Korea while in japan it doesnât.

- Japan has more advanced technology than Kenya that ensures heavy catch while Kenya has limited technology leading to low catch.

Management and Conservation of Fisheries