Pressure is the force acting normally (perpendicularly) per unit area.

The SI unit of pressure is N/M2 or Nm-2, which is also called pascal (Pa).

A block of wood measures 2cm by 3cm by 4cm and has a mass of 6 kg. Calculate its pressure when;

Pressure in liquids depends on the following;

Pressure in liquids increases with depth and density.

EXPERIMENT: To show variation of pressure in liquids

The lower hole, A, throws water farthest, followed by B and lastly by c

Explain why a diver at the bottom of the dam experiences greatest pressure.

At the bottom of the dam depth is greatest and therefore the diver experiences greatest pressure due to the weight above him.

When a liquid is poured into a set of connected tubes with different shapes, it flows until the level are the same in all tubes as shown.

This shows that the liquid flows to find its own level.

Liquid Levels in a U-Tube

When water is poured into a u-tube, it will flow into other arm. Water will settle in the tube with the levels on both arms being the same.

When one arm is blown into with the mouth, the level moves downwards, while on the other arm it rises. This is caused by pressure difference between the two arms as shown,

Pressure in liquids increases with depth below its surface

Pressure in a liquid at a particular depth is same in all directions.

Pressure in a liquid increases with density of the liquid.

Consider a container containing a liquid as shown below; 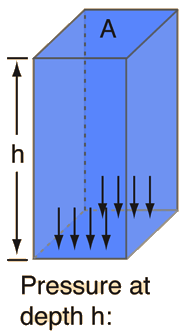 From definition of pressure = force/area

From the formula (p=ρhg) pressure is directly proportional to;

NOTE: Pressure in liquids does not depend on the cross-section area of the container.

The formula is also used to determine pressure due to a gas column.

Transmission of Pressure in Liquids

Pressure applied at one part in a liquid is transmitted equally to all other parts of the enclosed liquid. (Plunger).

This is the principle of transmission of pressure in liquids called Pascal’s principle which states that pressure applied at a given point of the liquid is transmitted uniformly or equally to all other parts of the enclosed liquid or gas.

Gases may transmit pressure in a similar way when they are confined and incompressible.

The principle of transmission of pressure in liquids is made use in hydraulic machines where a small force applied at one point of a liquid produces a much larger force at some other point of the liquid.

The hydraulic lift consists of a small piston S of cross-section A1 and a large piston L of cross-section area A2. When a force is applied on piston S, the pressure exerted by the force is transmitted throughout the liquid to piston L.

At the smaller piston S the force applied F1 cause a pressure P1 at the crosssection area A1.

The pressure is equally transmitted throughout the liquid to the larger piston.

NOTE; Equation applies if pistons are at the same level

Advantage of this system is that the pressure exerted in master cylinder is transmitted equally to all four wheel cylinders.

The liquid to be used as a brake fluid should have the following properties;

Atmosphere means the air surrounding the earth. The air is bound round the earth by the earth’s gravity.

The pressure exerted on the surface of the earth by the weight of the air column is called air pressure.

Atmospheric pressure can be demonstrated by crushing can experiment.

EXPERIMENT: To demonstrate the existence of the atmospheric pressure

During cooling, the container crushes in. 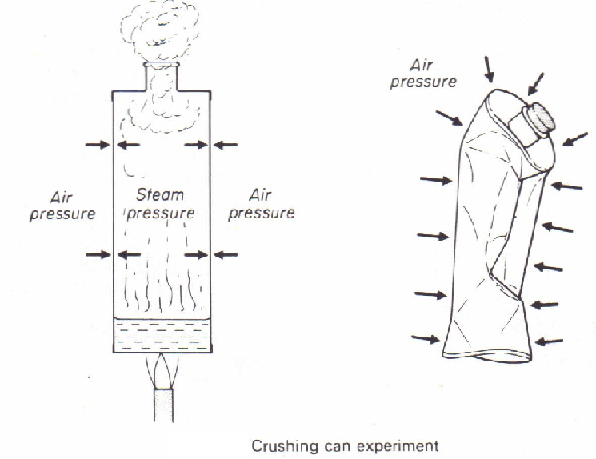 Maximum Column of Liquid that can be Supported by Atmospheric Pressure

If the straw was long enough and sealed at the top, it would be possible to estimate the height of water that would be supported by atmospheric pressure. 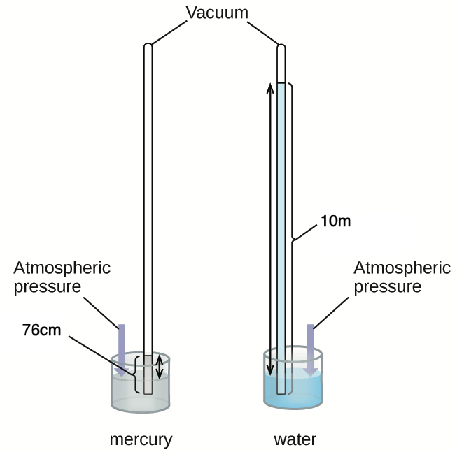 In case of water the column is too large.

Is an instrument used to measure fluid pressure.

It consists of a u-tube filled with water or any other suitable liquid or gas as shown.

Pressure at Z = Atmospheric pressure due to column of water.

Since the density of water and gravitational force is known we can determine pressure of a gas if the atmospheric pressure is known. 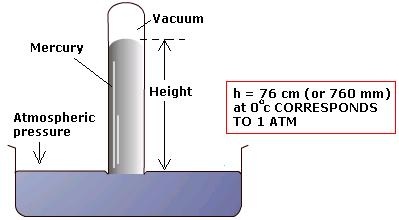 This difference in height column between mercury and water is that mercury is much denser than water.

Mercury column forms a simple barometer, its height changing inside on the glass tube as air pressure outside changes.

The space above mercury in the barometer tube must contain air or water vapour since the barometer reading will be as shown above.

The height h of the column is a measure of the atmospheric pressure. 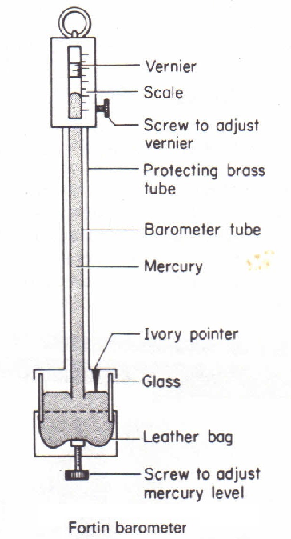 Is an improved version of a simple mercury barometer. Was designed by FORTIN

The ivory pointer acts as the zero mark of the main scale. The leather bag acts as reservoir of mercury height.

Before taking the reading, the level of mercury surface in the reservoir is adjusted by turning the adjusting screw until the surface of mercury just touches the tip of the ivory index.

The height is then read from the main scale and vernier scale.

The reading obtained from the barometer are in terms of the height of mercury column and written as mmHg or cmHg.

Is a portable type of barometer consisting of a sealed, corrugated metal box as shown below. 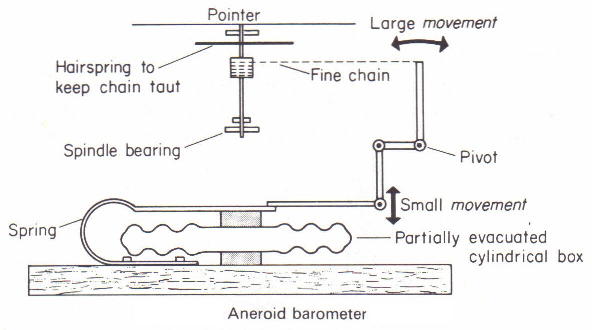 The pointer would indicate a particular value of atmospheric pressure of the surrounding so that any changes in pressure would be noticeable by movement of the pointer to either side of this atmospheric value on the scale.

The aneroid barometer movement makes it adaptable to measure heights.

Aneroid barometers (Altimeters) are used in aircrafts to measure heights.

They are portable and are used mostly for measuring gas pressure, tyre pressure, pressure of compressed air compressors and steam pressure.

It is made of coiled flexible metal tubes which uncoil when the pressure inside increases. The movement of the tube is made to drive a pointer across a scale, through a combined system of levers and gears.

The pressure of a car tyre, measured with a pressure gauge is 40Ncm-2. What is the total pressure of the tyre in Nm-2.

Application of Pressure in Liquids and Gases

A bicycle pump is a simple form of compression pump.

The pump is connected to a tyre which has a rubber valve in it. When the pump handle is drawn out air below the washer expands and its pressure is reduced below the atmospheric pressure.

Air from outside the pump the flows past the leather washer into the barrel. The higher air pressure in the tyre closes the tyre valve.

When the pump handle is pushed in, the air in the pump barrel is compressed.

The high pressure in the barrel presses the leather washer against the sides of the barrel. When the pressure of the compressed air becomes greater than that of air in the tyre, air is forced into the tyre through the tyre valve which now opens.

NOTE: There is an increase in temperature of the pump barrel during pumping because work is done during compressing the air.

It is used to raise water from wells. It consists of a cylindrical metal barrel with a side tube. It has two valves P & Q. 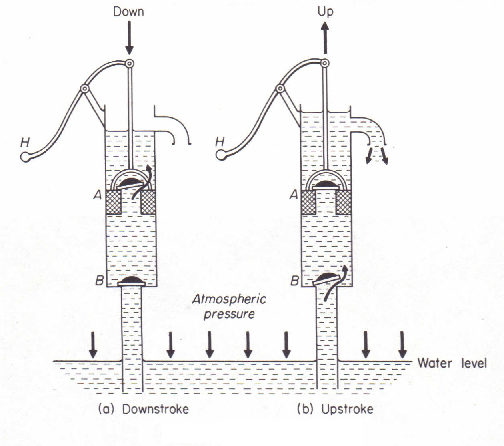 When the plunger moves during upstroke, valve A closes due to weight and pressure of water above it. At the same time, air above valve B expands and the pressure reduces below atmospheric pressure.

The atmospheric pressure on the water surface in the well below this pushes water up past valve B into the barrel.

The plunger is moved up and down until the space between A and B is filled with water.

During down stroke valve B closes due to its weight and pressure of water above its piston.

The atmospheric pressure support only 10m column of water, which is actually a theoretical value but practically this pump raises the water less than 10m because of; 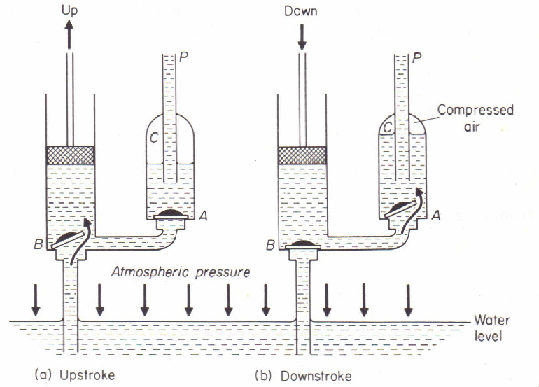 This pump can be used to raise water to heights more than 10m.

NOTE: Pressure above valve A is atmospheric hence the valve does not open.

During down stroke, the valve B closes. Increase in pressure in the water in the barrel opens valve A and forces water into chamber C so that as water fill the chamber air is trapped and compressed at the upper part.

During the next stroke, valve A closes and the compressed air expands ensuring continuous flow.

Advantages of a Force Pump over a Lift pump

A tube can be used to empty tanks or draw petrol from petrol tanks in cars. When used in this way it is referred as a siphon.

Pressure on the surface of the liquid is atmospheric pressure. Since end C of the tube is below the surface A by height h, pressure at C is greater than that at the surface.

The tube is first filled with the liquid after which it will continue to run so long as end C is below the liquid surface.

Pressure at C = pa + hρg. The excess pressure (hρg) cause the liquid to flow out of end C

The siphon will work only if;

NOTE: A siphon can operate in a vacuum.

Click here to download the pdf version of "PRESSURE - Form 1 Physics Notes", and read the full contents of this page

CLICK HERE to get "PRESSURE - Form 1 Physics Notes" on Whatsapp