Click the link below to download the full Form 2 Physics Notes pdf document, with all the topics.

The figure below shows two parallel rays incident on a concave mirror. F is the focal point of the mirror.

Sketch on the same diagram the path of the rays after striking the mirror.

Relationship between Radius of Curvature and Focal Length

It can be shown through geometry that the radius of curvature is twice the focal length i.e.

Laws of Reflection in Curved Mirrors

Four Major Cases in the Construction of Ray Diagrams

i. Object at infinity

iv. Object between C and F 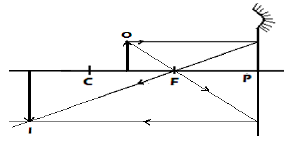 vi. Object between F and P

A lady holds a large concave mirror of focal length 1m, 80cm from her face. 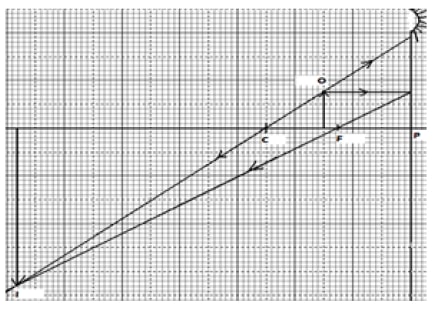 The object distance u, the focal length f, and the image distance v related by the mirror formula:

Graphical Analysis of the Mirror Formula

A concave mirror and an illuminated object are used to produce a sharp image of the object on a screen. The object distances and image distances are given below.

Note: The defect of spherical mirrors in which marginal rays are not brought into focus at the principal focus resulting in blurred images is called spherical aberration.