1.  Figure 1 shows three mirrors arranged at right angles to each other . A ray of light is incidenton one of the mirrors. 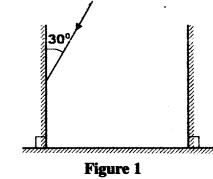 Complete the diagram to show the path of the ray after reflection on each of the mirrors.  (3 marks )

2. It is observed that when a charged body is brought near the cap of a positively charged electroscope, the divergence of the leaf increases . State the type of charge on the body. (1 mark)

3. State a reason for topping a lead-acid accumulator with distilled water. (1 mark)

4. Figure 2 shows a soft iron bar AB placed in a coil near a freely suspended magnet. 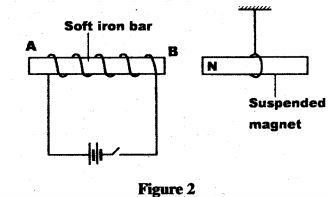 Explain the observation made when the switch is closed. (2 marks)

5 State the reason why a convex mirror is preffered over a plane mirror for use as a driving mirror.(1 mark)

6..State two ways in which the strength of the electromagnet can be increased.(2 marks)

8. Figure 3 shows straight waves incident on a divergent lens placed in a ripple tank to reduce its depth. 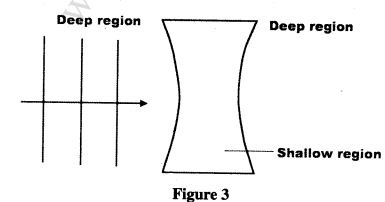 Complete the diagram to show the wavesthe waves in both shallow regions and beyond the lens.(2 marks)

9.A ship in an ocean sends out an ultra sound whose echo is received after 3 seconds,.If the wavelength of the ultra sound in water is 7.5cm and the frequency of the transmitter is 20 kHz, determine the depth of the ocean. (3 marks)

10. A nail at the bottom of a beaker containing glycerine appears to be 6.8 cm bellow the surface of glycerine. Determine the height of the column of glycerine in the beaker. (take the refractive index of glycerine as 1.47) (3 marks)

12 .Figure 4 shows a cathode ray entering into a region between two charged plates. 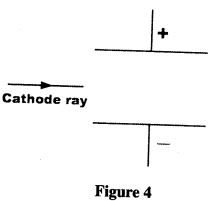 Complete the diagram to show the path of the ray in the field. (1 mark)

(i) Determine the energy of the incident radiation. (3 marks)

(iii) Determine the velocity of the emitted electrons from the metal surface in b(ii).(take the mass of an electron as 9.1 x 10-31 kg)(3 marks)

15. (a) State two factors that determine the resistance of a metallic conductor.(2 marks)

(b) Explain how a fuse safeguards electrical appliances against excessive currents. (2 marks)

(i) Determine whether a 10 A fuse may be suitable for the dryer. (3 marks)

(ii) Determine the cost of using the hair dryer for 3 hours if the cost of electricity is ksh 0.80 per kilowatt hour. (2 marks)

16 (a) It is observed that the alpha (α) particles have a lower penetrating power than beta (β) particles. Explain this observation. (2 marks)

(b) A radioactive substance has a half life of 12 years. Determine the time it will take to decay to 12.5% of its original value. (2 marks)

(c) A Geiger Müller (GM) tube is used for detecting radiations from a radioactive source.

State the function of:

(d) (i) In a diffusion chamber, explain why some of the tracks formed are observed to be:

(ii) State two advantages of GM tube instead of a diffusion cloud chamber to detect radiations from radioactive substances. (2 marks)

17 (a) State three factors that affect the capacitance of a parallel plate capacitor.(3 marks)

(b) Figure 5 shows the circuit used to charge a capacitor C. 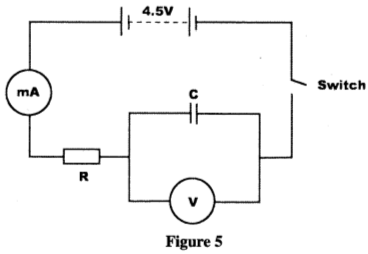 (ii) Explain how the capacitor gets charged (3 marks)

(iii) State the purpose of the resistor R. (1 marks)

(iv) On the axes provided, sketch the graph of voltage (v) against time(t) (2 marks)

(a) Three resistors 2Q, 3Q, and 4Q are to be connected to a cell such that they have the least effective resistance.

(i) Draw a circuit diagram to show how they can be connected to achieve this.(2 marks)

(b)A real object of height 1 cm is placed 50 mm from a converging lens forms a virtual image 100 mm from the lens.

(ii) On the grid provided draw to scale the ray diagram for the setup, to show how the image is formed. 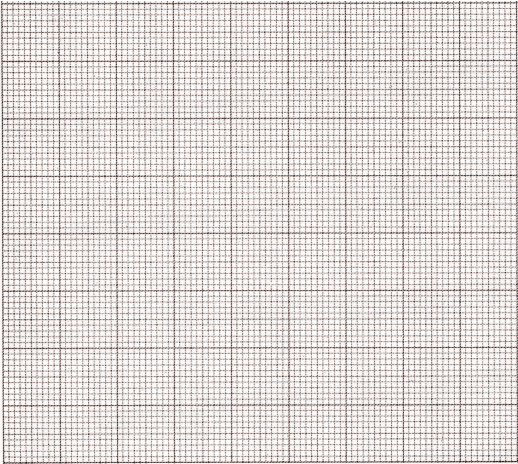