Read the passage below. It contains blank spaces numbered 1-15. for each blank space, choose the BEST alternative from the choices given. 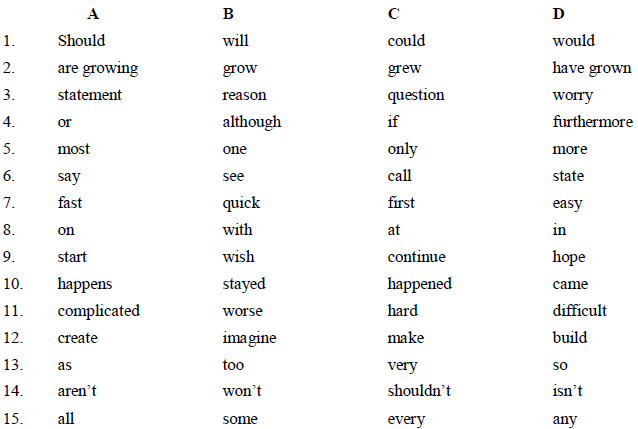 For questions 16 and 17. select the alternative that means the SAME as the underlined sentence.

In questions 18 and 19, choose the alternative that can BEST complete the given sentence.

In question 20 and 21, choose the words that means much the SAME AS the underlined

For questions 22 and 23. choose the BEST arrangement of the given sentences to form a sensible paragraph.

For questions 24 and 25, select the alternative that BEST fills the blank space in the sentences below:

Read the passage below and then answer questions 26 to 38.

Lion was hunting. Unfortunately, this seemed to be one of his bad days. No animal was within vicinity and the more he prowled the forest, the hungrier he became. It was getting too hot to continue and as such, he was almost giving up when he saw one of those tiny creatures in a thicket. Under normal circumstances, he would not have looked at it twice because even if he caught and ate it, he wouldn't be satisfied but a hungry man has no choice.

He moved stealthily towards it and just as he pounced, the animal took a dash in a flash at a corner. Lion pursued it but didn't go far as a big thorn pricked his paw and got stuck into it.
He sat down and roared loudly for help but instead; it sent animals scampering for safety. He tried to pull it out but to no avail. He tried again using his teeth but it was too tiny for his teeth even just to feel. It was then that Jackal, who was passing by, bumped into the struggling Lion. Lion begged and implored upon Jackal for help but the best Jackal could say was that he was not an expert at pulling out thorns and referred Lion to a friend he knew could perform the task with ease

However, Jackal demanded that before he could go for the friend, Lion would have to give in to his special demand. Lion would have to agree to be kicked hard five times on the back. Lion tried to object but when Jackal threatened to leave him alone, he obliged. However, he too had a secret plan: As soon as the thorn was pulled out, he would kill and eat both Jackal and his friend, irrespective of the size. That, to him, would be better than wasting time later to go hunting in the thorn-infested forest, Soon, Jackal returned with his friend, Porcupine. Before Porcupine could embark on his mission, Jackal kicked Lion five times on his back a hard as he could. Porcupine was shocked! With very little strain, Porcupine pulled out the thorn and subsequently the pain in Lion's paw subsided.

Porcupine was not in a hurry to leave but was surprised to realise that Jackal had melted away' unnoticed. Seeing nothing more to do, Porcupine walked away slowly and disappeared into the thickets. Lion was unable to move for some time. He did not know whether to start hunting or just sit there nursing his injuries. He realised he had been unkind to many animals in the past and if he didn't change he would have no friend to help him next time. He stood up and started walking back home.

Read the passage below and then answer questions 39 to 50.

All living things breathe in oxygen and breathe out carbon dioxide. Carbon dioxide is harmful to the human body and too much of the gas can lead to death.

When you breathe, your internal organs contract due to the air pressure caused by oxygen, your lungs expand to fill up to depth and the diaphragm contracts with an upward movement supporting the other organs. The part of the face or head through which a person or animal smells and breathes is the nose. The nose has two holes called nostrils. The nostrils and the nasal passages are separated by a small wall called septum. Closer to the tip of your nose, the septum is made of cartilage, which is flexible material that is firmer than skin or muscle but not as hard as bone. Behind your nose, in the middle of your face is a space called the nasal cavity. It connects with the back of the throat. The nasal cavity is separated from the inside of your mouth by the palate-the roof of your mouth. When you inhale air through your nostrils, the air enters the nasal passages and travels into your nasal cavity. The air then passes down the back of your throat into the trachea or windpipe, on its way to the lungs.

It is recommended that you breathe through your nose, not through your mouth. The human nose conditions inhaled air, for instance, by warming and or humidifying it, also flicking if moving and by mostly reclaiming moisture from the air before it is exhaled. It is also nourished by warm mucus like material that sieves dirt or harmful debris off the inhaled oxygen. The nose, with time. also grow's hair that prevents large particles of dirt from reaching the lungs. It is therefore not advisable to breathe via your mouth. This is as harmful to your body for it becomes bridge to harmful fragments entering your body.

Breathing is also important for calming down nerves as well as a stress relief agent. Often when people are stressed and overwhelmed. they tend to either breathe improperly, hold their breath or entirely stop breathing. This is a normal response to stress. When overwhelmed, sit up with your back straight and place your hand on your abdomen. Also, when breathing in, make sure  abdomen contracts towards your spine.

You have 40 minutes to write your composition.

Below is the beginning of a story. Write and complete the story. Make your story as interesting as you can.

Click here to download the pdf version of "ENGLISH - KCPE 2020 PREDICTION 1 SET 2", and read the full contents of this page

Read 5451 times Last modified on Friday, 28 February 2020 13:15
Ask a question related to this topic in the comment section below.