Read the passage below. It contains blank spaces numbered 1-15. For each blank space, choose the best alternative from the choices given:

The bicycle, though invented a century ago__1__is still a very popular means of transport today. In__2__earliest years of its invention, the bicycle sported both large and small__3__. At first, there was no mechanism to stop it. Men had to rely on their heels to do the work. Today _4_, the bicycle has changed greatly. The modern bicycle only resembles the ancient one in that it _5_ two wheels. On each wheel is__6 __series of pattern spokes. It also has a series of teeth for the various gears. Before, the handbar was straight, now it can be upturned, down turned or straightened __7__, the handbar was used to direct the bicycle left, right and also balance it. These days, it also __ 8__ the gears that control the speed and a bell. The seat of the bicycle is called a saddle, and the pedal is the part the foot is put to __9___the bicycle forward. A person who rides a bicycle is called a__10__. The bicycle is powered by the muscles of a person who rides it. It is__11__advisable to carry along a bicycle pump to pump air into the bicycle tubes incase the tyres __12__flat. _13__ is a good exercise as it tones the whole body.

One must not forget to __14__ a helmet when exercising in this manner. The bicycle may continue to evolve in years to come but man's love for __15__will remain the same. 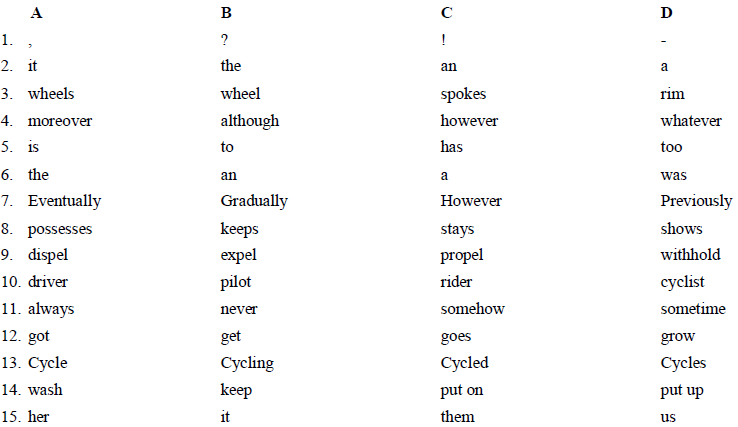 For questions 16 and 17. choose the prefix that can be added to the given word to form a NEW word:

For questions 18-20, choose from the endings given the one needed to complete each of the following sentences

For questions 21 and 22. select the BEST order

Read the passage below and the answer questions 26 to 38

It was not long after I soon learned, however, that life for a growing boy was a bit all play. At least, not for boys with parents like mine. Although my mother had never had the benefit of formal education herself, she was determined that I should be sent to school the earliest opportunity. My father probably due to my mother's persuasive power, was strongly in favour of this also. Even though I could often get around my father, I knew that once my mother's mind had been made up, there was nothing I could do about it.

In school, I found my first day so disappointing that I ran away, determined never to return. But my mother turned a deaf ear to my raging protests and quietly but determinedly dragged me by the arm each morning and deposited me in the classroom.

Eventually, I realised that I had lost the battle and decided that I was going to be forced to stay there. I might as well get to like it and do what I could to learn something. To my surprise, I soon found that I enjoyed my lessons and looked forward to go to school even though we lived in fear and trembling of the teacher because of his firm and active belief in the adage, “spare the rod and spoil the child." I disliked being forced to do things against my will, for I had not been accustomed to it and I used to think what a paradise school would be if we were left in peace to do our studies without the presence of a school class teacher.

Pupils of various levels were in one room and the master used to teach a class at a time. It must have been a hard job for him and we did not do anything to ease his lot. Luckily, I was keen on learning, so keen, in fact that soon my only dread was that my father might one day be unable to afford school fees. Because of this, I started to rear a few chickens which I sold later. Because of this income, it meant I could not only help to meet the school fees but I had money to buy books as well.

Read the following passage and answer the questions 39 - 50:

If you have been to Lang'ata, you must have known a place called Dr. Barnado Children's Home. Who was Doctor Barnado? Thomas John Barnado, a young Irish man, wanted to be a medical missionary in China in 1866. When he was 20, he set off from his home in Dublin to train at a London hospital.

The hospital was in the East End, where the people were miserably poor and ignorant. Barnado found that they needed help as badly as anyone he was likely to find in China. He and his friends decided to start a ragged school in the evenings to teach children who otherwise would never learn to read and write, for in those days, there were
hardly any schools for people who could not pay.

One winter evening, when Barnado was about to shut up the school, he noticed that one particularly ragged little boy was still standing by the fire. "Come on”, said Barnado, “It's time to go home now.” “Please sir, let me stay,” the boy begged. "Stay! What for?” Asked Barnado. "Your mother will wonder why you are so late.” “I have no mother." said the boy.

"Your father then, where is he?” “I have got no father.” "Don't tell stories, where do you live?" "Nowhere.” answered the boy.  Barnado discovered the boy, Jim Jarris, who was 10 had never known his father, and that since his mother had died, he had been quite homeless. He could sometimes earn a few pennies, but seldom had enough to eat. His few clothes were in shreds and he went barefoot always. He slept wherever he could find shelter, he had spent the night before in hay cart, he said there were many boys like him.

Barnado took Jim back to his own lodging and gave him a hot meal. Then, he asked him to show him some of the places where the other boys might be sleeping. Jim led Barnado through the street to a shed which was a rag market by day. On the open iron roof a dozen boys huddled a sleep under the frost moonlight. All were in rags, all utterly homeless.

After this, Bamado went out several times a night, with Jim, to collect the most miserable of the boys. Before long, he was paying for lodging for Jim and fifteen others. But Barnado was only a medical student, not a rich man. So, he could not begin to provide for all the destitute children in London. When his friends found out what he was doing, they helped him with money and wanted to give all his time to this work. But Barnado still thought he ought to become a missionary.

Dr. Barnado was brilliant at persuading people to support his work. His whole life was given up to caring for destitute children, and worked so hard that he wore himself out and died when he was only 60. Now, there are Barnado Homes all over the world

You have been given 40 minutes to write your composition.

Below is the beginning of a composition. Complete it in your own words making it as interesting as you can.

Click here to download the pdf version of "ENGLISH - KCPE 2020 PREDICTION 1 SET 3", and read the full contents of this page