The passage below contains blank spaces numbered 1 to 15. For each blank space, choose the BEST alternative from the ones given. 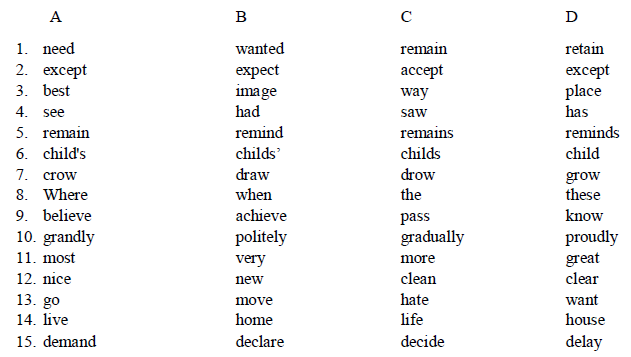 For questions 16 to 18, complete the sentences with the correct alternative.

For questions 19-21 choose the word that means the same as the underlined words.

For question 22 and 23 choose the odd one out

In questions 24 and 25 choose the sentence that is correctly punctuated.

Read the passage below and then answer questions 26 to 40

Once upon a time in the animals’ land, hare felt very cold and shivered terribly. He needed a heavy blanket to provide him with warmth. He went to see Tortoise who was the best blanket-maker in the land. "Make me a heavy warm blanket." Hare said. "Come next year. I have ten blankets to make for other people, Tortoise said as she happily threaded a blanket at a snail's pace. "At that rate," Hare said impatiently, I might as well make the blanket myself. Give me the threads." Hare grabbed a ball of blanket thread and ran off. When he got home, he realized
that he had no idea about how to make a blanket. As he wondered what to do, he recalled that he had seen leopard's wife making blankets for her children. So he thought of a plan. He went and hid in a thicket near leopard's home. He kept watch from there.

When leopard and his wife left the house, Hare walked into the compound. He gave Leopard's child the thread and thundered: "Tell your mother the king wants her to make a warm blanket for him in three days!" When leopard and wife came home, the child said, "Mother, Mother! You must make a blanket very quickly!" "Which blanket?" Whose blanket?" Leopard's wife asked surprised. "The king's blanket!" the child said excitedly.". The king himself brought this thread. He wants the blanket made quickly." Leopard's wife wondered how king Lion could have come to her compound instead of sending one of his many subjects. However, being an obedient woman that was known to be, she immediately started making the most beautiful designed blanket she could make. She finished making the blanket and waited for the king to come for it. After waiting for long time, she decided to venture into a nearby forest to look for food.

"Immediately the king appears." She instructed the child, "Whistle loudly. I will rush back to give him his blanket." Leopard's wife had hardly stepped out of the compound when Hare jumped in front of the child and demanded, "Give me the blanket!" Leopard's child fearfully ran into the house and brought the blanket. Just then, Leopard's wife, who had seen hare jump into her compound, grabbed Hare as she tried to run off with the blanket. Hare managed to escape, but he was without the blanket and had lost his tail.

Read the passage below and then answer questions 41 to 50.

Nzambani rock is undoubtedly one of the country's largest stone outcrops. It stands tall and proudly next to Nzambani primary school in Kitui County. It is a rock with many tales. Some locals say that the stone is living while others claim they hear noise from the direction of the stone at night. It is also believed that anyone who goes around the stone seven times would be mysteriously change into a member of the opposite sex. The rock is said to have housed some ritual practices in the distant past. But the controversial tales remain just that, as no
personal accounts of these happenings have ever been given.

The rock is beautiful. It leaves every single visitor yearning to come again. Its location was once filled with roaming wildlife which could jeopardize children lives and may be the cause of the many scary tales. At dusk, herdsmen striding home with their cattle in Chuluni some metres from the rock, feel its towering presence and protection. Traders whiling away time outside their shops at the top on Kaluluku Hill get a captivating bird's eye view of the rock. At dusk, when the sun is sinking far away at Kwa-vonza; as seen from this hill, the rock looks like a big shadow. From the distant Museve and Kitimui hills, the 600 feet Nzambani rock is seen struggling for its space among the tall trees around. It is as if it is reaching up to get a gulp of fresh air since it is believed to be living. The rock has a shining allure and leaves many convinced that it might be growing. Or how else would you explain the amazing fact that even though the trees keep on growing throughout the year, they never surpass it in height.

Nzambani rock remains a scenic tourist attraction in Kitui County. It is only about 45 minutes drive from Kitui town. It has a metallic staircase to its top, which was built some years back. An adorable fee is levied for both locals and foreigners at the parking lot office. It takes only 15 minutes to walk from the parking lot to the base of the rock. The staircase is fenced for the sake of children and other "height phobic' people. On a windy day, the ladder sways. A spectacle that scares many people with the fear of height. From the top, one has a 360 degrees view of Kitui County. Nzambani rock is visible from a distance of 60 miles away. It is no doubt a symbol of identity for the region and explains in many ways, its captivating history.

The following is the beginning of a story. Complete it in your own words and make it as interesting as possible

Click here to download the pdf version of "ENGLISH - KCPE 2020 PREDICTION 1 SET 4", and read the full contents of this page

Read 2075 times Last modified on Wednesday, 04 March 2020 12:51
Ask a question related to this topic in the comment section below.