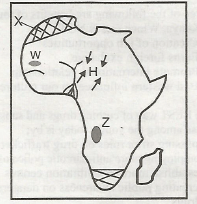 More in this category: « Science Questions and Answers - Class 8 Term 2 Opener Exams 2022 Set 2
back to top