Elements of a Map

A map is a drawing that represents the earth or part of it on a flat surface.
The key elements of a map include:

Importance of Maps include:

This referred to giving meaning to the features and symbols used on a map.
We use the key elements of a map to read and interpret maps. Symbols and signs helps us to identify the different features, areas and activities on a map e.g.
The presence of a quarry shows that mining is taking place in the area.

Location, Position and Size of Kenya 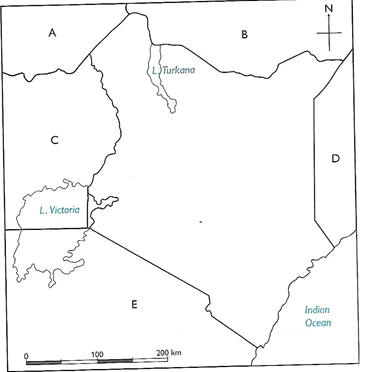 Position of Kenya in relation to her neighbours
Kenya has several neighbouring countries. Kenya is surrounded by:

Ways in which Kenya maintains good relations with her neighbours.

The size of Kenya

Drainage features are physical features that are associated with water. They include

Weather and Climate in Kenya

Climate - refers to the average weather conditions of a particular place over a long period of time. Climate can be described as wet, dry, hot, cold, warm or cool.

The characteristics of climatic regions in Kenya are:

These are structures/environments that remind us of our history or where we have come from.
They include:

Caring for Historic built Environments in our country