Use the diagram below to answer question 16. 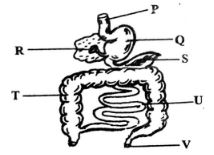