EFFECT OF AN ELECTRIC CURRENT ON SUBSTANCES - Chemistry Notes Form 2

Next Topic »
CARBON AND IT'S COMPOUNDS - Chemistry Notes Form 2

These materials carry an electric current via freely moving electrically charged particles, when a potential difference (voltage) is applied across them, and they include:

Electrolysis of a Compound

In summary, the following substances are electrolytes: 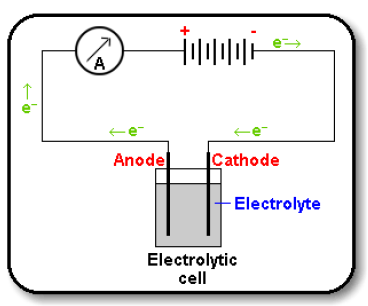 Factors that Determine Products of Electrolysis

The position of the ion in the electrochemical series

The concentration of the ions

The nature of the electrode

Electroplating is very useful because of the following reasons:

The process of electroplating involves the following steps:

Basic rules for electroplating an object metal M are as follows:

Next Topic »
CARBON AND IT'S COMPOUNDS - Chemistry Notes Form 2