Force is a pull or a push on a body. Its SI unit is newtons (N)

Force is that which changes a body’s state of motion or shape. Some forces are small and others are large.

Force is represented by a line with an arrow showing the direction it acts. i.e → F

Is a force of attraction between two bodies of given mass.

Objects thrown from the earth’s surface always falls back to the surface of the earth. This force which pulls the body towards the centre of the earth is called Gravitational force.

Moon and other planets also have their gravitational force to objects.

The pull of gravity on the body towards the centre is called weight. The weight of an object varies on different planets because of different gravitational pull.

Tension force is as a result of two opposing forces applied. The pull or compression of a string or spring at both of its ends is called Tension.

Compressed or stretched object will tend to regain its original shape, when the stretching or compressing force is removed. Materials that can be extended without breaking are called elastic materials. Such materials can be used to make a spring balance an instrument used to measure force. Other examples include; bows and catapults.

The upward force acting on an object immersed in a fluid (liquid or gas) is called upthrust force.

An object in a vacuum will not experience upthrust.

An object weighs 80N in air and 60N when immersed in water. Calculate force acting on the object.

Frictional force is a force that opposes relative motion between two surfaces in contact.

The opposing force involving a fluid is called viscous drag (viscosity). This viscous drag limits the speed with which a body can move in a liquid.

Friction can be applied during walking.

Pulling a block without rollers

pulling a block with rollers

The wooden block starts to move when the applied force is just greater than frictional force between the block and the surface of the bench.

Frictional force can be reduced by using rollers, oiling and smoothening.

Magnetic force is the force of attraction or repulsion between a magnetic material and a magnet.

The force of attraction between molecules of the same kind is known as cohesive force e.g. A water molecule and another water molecule.

The attraction between molecules of different kinds is known as adhesive force e.g. between water molecules and molecules of the container in which the liquid is put.

EXPERIMENT: To see the behaviour of water on different surfaces.

Water does not wet the waxed glass surface because the cohesive force is greater than the adhesive. 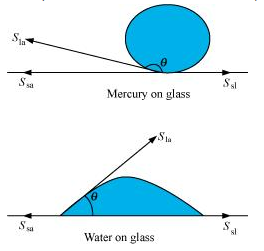 N/B: Mercury is poisonous and should not be handled in ordinary laboratory.

EXPERIMENT: to demonstrate cohesive and adhesive forces of liquids on narrow tubes

Different liquids rise by different heights depending on the diameter of the glass tube.

When mercury is used, the level of mercury inside the tubes goes lower than that outside the tubes. The surface of the mercury will curve downwards (convex).

On the other hand, the force of cohesion with the mercury is greater than the force of adhesion between glass and mercury. The mercury sinks to enable mercury molecules to keep together.

This is a force that causes the surface of a liquid to behave like a stretched plastic skin.

The force is due to the force of attraction between individual molecules in a liquid.

Its due to this force that liquids form drops, water wets the surface but runs off others, some insects like pond skaters manage to rest on the surface of water without sinking, water rises up in narrow glass tubes but mercury is pushed down to a lower level in the same tube and steel needle or razor blade floats on water even though steel is denser than water

EXPERIMENT: to investigate the behaviour of a liquid surface

A Molecule say C deep in the liquid is surrounded by molecules on all sides so that the net force in it is zero. However, molecules of the surface, say A and B will have fewer molecules on the vapour side and hence it will experience a resultant inward force causing the surface of the liquid to be in tension.

This is a type of force which causes attraction or repulsion between charges. Charges can be positive or negative. Like charges repel and unlike charges attract

Question: Explain why when you remove cloth at night you observe sparks

It’s a force which acts on two conductors carrying electricity.

They are two equal forces but acting in opposite to each other.

When a block of wood is placed on a table, its weight acts on a table (action). It is pressed on the surface downwards. The reaction (opposite force) of the table acts on the block.

Mass is the quantity of matter in an object while weight is a measure of the pull of gravity on an object. The S.I unit of mass is kg (kilogram) and of weight is Newton (N).

Due to the shape and rotation of the earth, the weight of an object varies from place to place while mass is constant (does not change).

A body weighs more at the poles than at the equator.

Differences between mass and weight

Relationship between mass and weight

Force is measured using an instrument called a spring balance.

The extension of a spring can be used to measure an applied force. The larger the force, the more the spring extends.

A spring balance measures forces and should therefore calibrated in newtons.

Some spring balances are calibrated in kilograms. In such cases, one is advised to convert from kilograms to newtons. (1Kg=10N)

Note; In c) extension is too large and spring may straighten out.

– is a quantity which has magnitude (size) only. It can be specified by a number and unit. Examples include; mass, area, density, volume, energy, time, pressure, temperature, and length.

Scalar quantities are added by the normal rules of arithmetic e.g. 3cm2+4cm2=7cm2

– is a quantity which has direction and magnitude (size). It can be specified by a number, unit and direction. Examples include; weight, force, velocity, displacement, acceleration, momentum and magnetic field strength.

A vector quantity is represented on a diagram by a straight line with an arrow.

The sum of two or more vectors is the resultant vector. Parallel forces can be added arithmetically which act on an object.

NOTE; Forces acting in opposite directions, the resultant is their difference.

To specify resultant force, both magnitude and direction are given.