TEMPERATURE is the degree of hotness or coldness of a body

Temperature of a body is measured by an instrument called a thermometer.

Temperature is a basic physical quantity and is measured in degrees celcious (0C) or Kelvin (K).

The S.I unit of temperature is Kelvin (K) which is a scalar quantity.

Thermal Expansion and Contraction of Solids, Liquids and Gases

Expansion and Contraction in Solids

Thermal expansion and contraction in solids can be demonstrated using a ball and ring experiment. Set the apparatus as shown below.

NOTE: The ball should pass through the ring when both are at room temperature.

Why Solids Expand on Heating

The molecules of a solid are closely packed together and are continuously vibrating in their fixed positions.

When a solid is heated the molecules gain more kinetic energy and therefore make larger vibrations about their fixed positions. This increase in vibration means that the molecules collide with each other with larger forces and the molecules increases and so the solid expand.

The measure of the tendency of a particular material to expand is called its expansivity e.g. aluminium expands more than iron thus aluminium has higher expansivity than iron.

The knowledge of linear expansivity values is applied in the designing of materials to ensure that they are able to operate well under varying thermal conditions.

Ordinary glass expands at a higher rate than Pyrex glass. When hot water is poured into a tumbler made of glass it breaks but does break in Pyrex glass.

Concrete and steel are reinforced together because they are of the same linear expansivity. Hence cannot crack under varying thermal conditions.

When two metals of different linear expansivity are riveted together they form a bimetallic strip.

Brass and steel are used to make the bimetallic strip as shown.

On cooling, the brass contracts more than steel. It therefore becomes shorter than the steel and thus ends up being on the inner side of the curve as shown in (c) above

Applications of Expansion and Contraction in Solids

Gaps are left between the rails. Expansion for the rail is provided by overlapping the plane ends using overlapping joints as shown in the photo below. 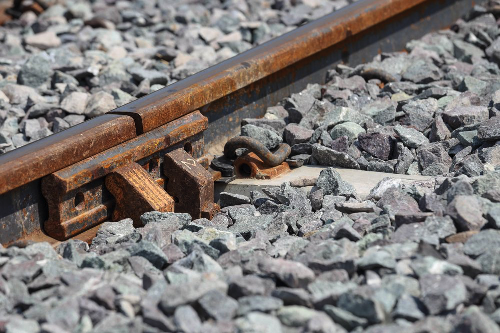 If these gaps for the expansion are not provided then during hot weather, they rails may buckle out, bend and cause derailment of the train leading to destruction and accidents.

Pipes carrying steam from boilers are fitted with loops or expansion joints to allow pipes to expand and contract easily when steam passes through and when it cools down. 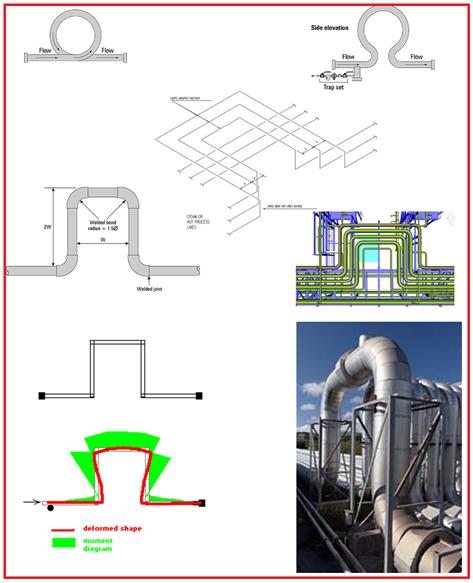 They are loosely fixed to allow for contraction and expansion. During cold weather, they contract and when it is warm they expand.

Telephone or electricity wires appear to be shorter and taut in the morning. However in hot afternoons, the wires appear longer and slackened.

In bridges made of steel girders, one end is fixed and the other end placed on rollers to allow for expansion as shown.

Thick metal plates, sheets and girders in ships are joined together by means of rivets.

The rivet is fitted when hot and then hammered flat. On cooling, it contracts, pulling the two firmly together as shown.

A thermostat is used to maintain a steady temperature in some devices such as electric iron box, refrigerators, fire alarm and flashing unit for indicator lamp in motor cars.

Expansion and Contraction in Liquids

The experimental set up below can be used to demonstrate expansion of a liquid.

A glass flask is filled with coloured water and heated as shown above.

Immediately the level of coloured water on the tube drops slightly at first and then starts rising.

The initial fall of the level of the water is due to the expansion of the glass flask which gets heated first. The water starts expanding when heat finally reaches it and it rises up the tube.

NOTE: The water expands faster than the glass.

Different liquids expand more than others for a given temperature. Eg Methylated Spirit expands more than water. 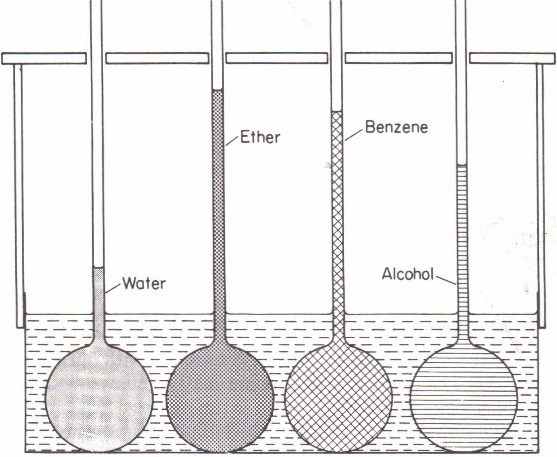 Expansion and Contraction in Gases

The experiment below can be used to demonstrate expansion of air.

Invert the flask with glass tube dipped into the water as shown. 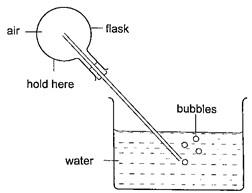 Warm the flask with your hands for some time and note what happens.

Remove your hand and let the flask cool while the tube is still inserted in water.

On cooling the air inside the flask contracts and water rises up the glass tube.

The Anomalous (unsual) Expansion of Water

Solids, liquids and gases expands when heated and contracts when cooled.

Water however shows an anomalous (unusual) behaviour in that it contracts when it is temperature is raised from 0oC to about 4oc.

When ice is heated from say -20oC, it expands until its temperature reaches 0oC and it melts with no change in temperature. The melting is accompanied by contraction. The water formed will still contract as its temperature rises from 0oC as shown.

Above 40C, the water expands with increase in temperature. Since volume of a given mass of water is minimum at 4oC, water at this temperature has a maximum density, slightly higher than 1g/cm3.

A sketch of the variation of density with temperature.

At the melting point of water (0oC) there is a drastic increase in the volume, resulting in a large decrease in density as the ice forms.

Effects of Anomalous Expansion of Water

1. Freezing of lakes and ponds

Water in lakes and ponds usually freezes in winter. Ice is less dense than water and floats on water.

Since ice a bad conductor of heat it insulates the water below against heat losses to the cold air above.

Water remains at 40C being the most dense, remains at the bottom of a lake while ice being less dense floats on layers of water at different temperatures as shown.

Fish and other aquatic animals and plants can therefore survive by living in the liquid layers below the ice.

Since the density of ice (0.92g/cm3) is slightly less than that of water it floats with only a small portion above the water surface. The rest and bigger portion rests under water. A big mass of such submerged ice is known as an iceberg.

It poses a great danger to ships as navigators cannot see the submerged part.

When water in a crack in a rock freezes, it expands. This expansion breaks the rock into small pieces.

Water pipes bursts when the water flowing through the pipes freezes.

A thermometer is an instrument used for measuring temperature. There are various types of thermometers in use.

The common types of thermometer include;

A liquid-in-glass thermometer commonly in use is mercury or coloured alcohol as the thermometric substance.

The volume of the liquid changes uniformly with the change in temperature.

The liquid in the bulb must; (characteristics)

-the most common in use is mercury and alcohol.

Properties of the Two Thermometric Liquids

Explain why water is not used as a thermometric liquid?

The range between this two fixed points is divided into a number of equal divisions.

On the celcious scale, the lower fixed point is the temperature of pure melting ice and is taken as 0oC. The impurities in the ice would lower its melting point.

The upper fixed point is the temperature of steam above water boiling at normal atmospheric pressure of 760mmHg and is taken as 100oC.

When these points have been marked, the range between them is divided into 100 equal divisions. Each division is called degree.

Features of a Common Thermometer

The basic features of a common laboratory are as shown below.

Bulb- Carries the liquid in the thermometer. It has a thin glass wall for effective heat transmission between the liquid and body whose temperature is taken.

Capillary bore – Liquid expands and contracts along the capillary tube. It is narrow for high degree of accuracy.

Glass stem – Is a thick wall surrounding the capillary bore. It also serves as a magnifying glass for easy reading of scale.

They are the commonly used temperature scale.

The celcius scale has the fixed points at 0oC and 100oC.

In Kelvin scale, the temperature of pure melting ice is 273K while that of pure boiling water at normal atmospheric pressure is 373K.

The lowest temperature in the Kelvin scale (0K) is referred as absolute zero.

This is the temperature at which the energy of the particles in material is zero.

To change oC to Kelvin

To change Kelvin to oC

NOTE: Temperature in Kelvin scale cannot have a negative value because the absolute zero, (0 K), is the lowest temperature attainable.

A clinical thermometer is an instrument used to measure the temperature of a human body.

It uses mercury as its thermometric substance and has a narrow constriction in the tube just above the bulb.

The diagram below shows the main features of a clinical thermometer.

The constriction prevents the mercury level from falling down when it contacts with the human body.

The clinical thermometer has a short scale of temperature from 35oC to 43oC spread over its entire level. This is because the human body temperature falls slightly above or below 37oC which is the temperature of a normal and healthy person.

This thermometer is used to record the maximum and minimum temperature of a place during a day.

The thermometer consists of a U-tube connected to two bulbs. The U-tube contains mercury.

The figure below shows the main features of a six’s maximum and minimum thermometer. 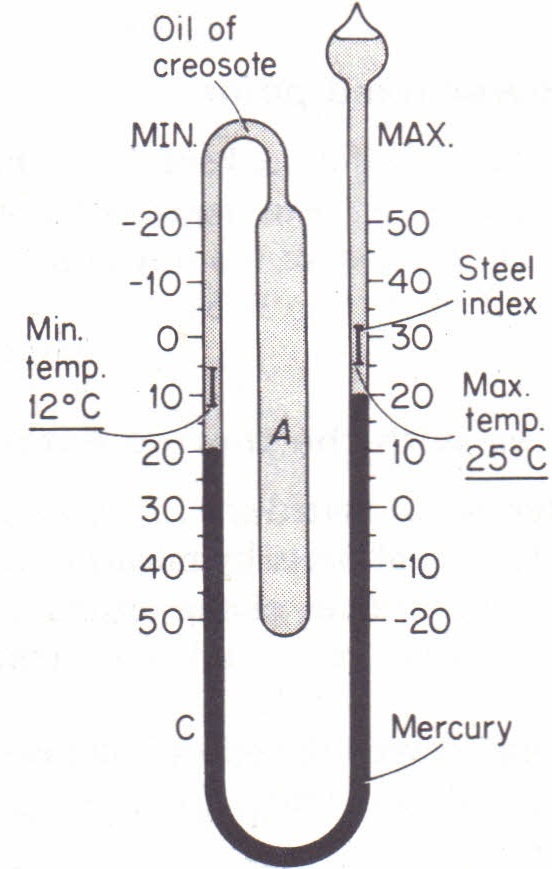 Working of the thermometer

When temperature raises alcohol occupying volume of bulb A expand and forces mercury in the U-tube to rise on the right hand side.

On the other hand when the temperature falls, alcohol in the bulb A contracts and the mercury is pulled back rising u the left hand side of the U-tube. The index B is then pushed up. During contraction of the alcohol, index A is left behind ( in the alcohol) by the falling mercury.

The minimum temperature is then read from the lower end of index B.

NOTE: To reset the thermometer, a magnet is used to return the steel indices to the mercury surfaces.

It is made up of a bimetallic strip with one end fixed and the other connected to a pointer. Metals used are usually brass and invar. As temperatures increase the strip unwinds and moves the pointer over a calibrated scale. It is used to measure high temperatures.

Thermocouple is a junction made of copper and iron looped at both ends. In practice a sensitive millivoltmeter is used instead of a galvanometer. A cold junction is maintained in melting ice (0oC) while the other junction is heated steadily. This thermometer does not apply the principle of expansion. 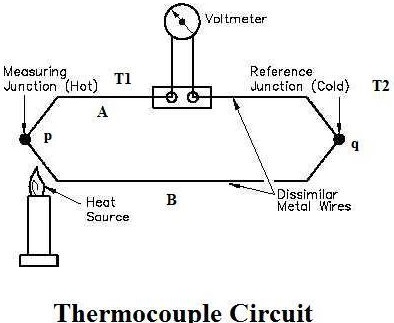