Light is a form of energy. It enables us to see the surrounding objects. Light itself is not visible but its effect is felt by the eye.

Light is also very essential as a source of energy for the process by which plants make their own food (photosynthesis).

Non-luminous source – these are objects which do not produce light of their own. They are seen when light falling on them from luminous sources is reflected (bounces off their surfaces) e.g. the moon, planets, plants, people, books, walls, clothes e.t.c.

Rays and Beams of Light

A source of light produces pulses of energy which spread out in all directions. The path along which light energy travels is referred to as a ray of light. Rays are represented by lines with arrows on them to show the direction of travel.

A stream of light energy is called a beam. It is also considered to be a bundle of rays of light. Beams of light can be seen;

Types of Beams of Light

Diverging beam – These are beams of light that appear to spread out (diverging) e.g. light from a spotlight.

Converging beam – these are beams which appear to collect (converge) to a point.

Parallel beam – are those beams which appear to be perfectly parallel to each other e.g. beam of light from the sun reaching the earth’s surface.

OPAQUE – these are objects that do not allow light to pass through them at all e.g. brick walls, metals, wood, stones e.t.c.

TRANSLUCENT – these are objects that allow light to pass through but we cannot see through e.g. glass panes used in toilets and bathroom window and greased paper.

TRANSPARENT – these are objects which allow light to pass through and we see clearly through them e.g. car wind screen and ordinary window panes.

Light does not need a material medium to carry it. In a vacuum, the speed of light is 3.0 x 108m/s. Light from the sun reaches the earth having travelled mostly through a vacuum.

When light falls on an opaque object, it casts a shadow of the object with sharp edges on a screen behind it. This suggests that light travels in a straight line.

To investigate how light travels

Arrange the apparatus as shown 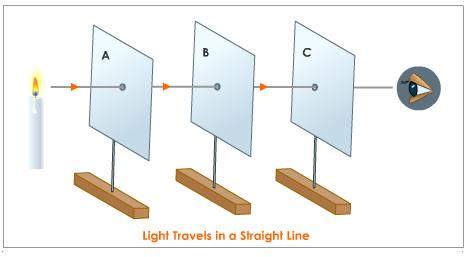 The cardboards are arranged such that holes are exactly in line.

When the holes in the three cardboards are in line, the eye can see the lamp.

However when the middle cardboard is displaced, the eye can no longer see the lamp.

When the holes in the cardboards are in a straight line, light travels through the holes and the lamp is seen from the other side. When one of the cardboards is displaced, the beam of light is cut off and since light cannot bend to follow the displaced hole, the lamp cannot be seen.

Light travels in a straight line. This property is known as rectilinear propagation of light.

Shadows are formed when an opaque object is on the path of light. The type of shadow formed depends on;

1. To study the formation of shadows by a point source of light

Consider the set up below, 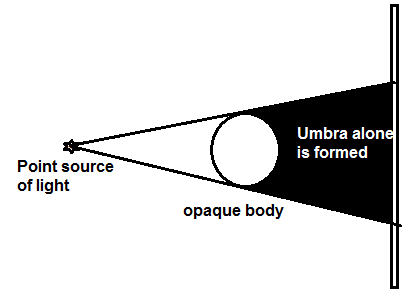 A uniformly and totally dark shadow is seen on the screen. This shadow is called umbra (Latin for shade)

The shadow has a sharp edge, supporting that light travels in straight lines.

2. To study the formation of shadows by extended (larger) source of light

Consider the set up below (source of light made larger) 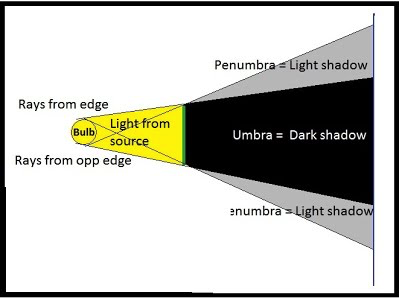 The centre of the shadow remains uniformly dark as before, but smaller in size.

The shadow is edged with a border of partial shadow called penumbra.

NOTE: Extended light source produce light that is much softer and without sharp edges.

It is used in frosted light bulbs and lamp shades to provide a more a more pleasant lighting with less sharp edges.

3. To study the formation of shadows by extended (larger) source of light when object distance is changed

Consider the set ups below, 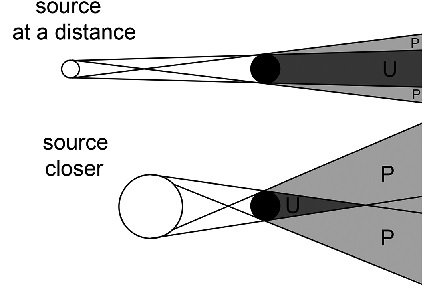 When the ball is moved closer to the source, a ring of penumbra is formed. No umbra is seen.

When the ball is far away from the source, there is umbra surrounded by penumbra.

The centre of the shadow receives light from the extended source. Since the object (ball) is smaller than the source of light, its umbra does not reach the screen because of the distance.

When the object is moved away from the source, the tip of the umbra reaches the screen.

An eclipse is a phenomenon of shadow formation which occurs once in a while.

It’s the total or partial disappearance of the sun or moon as seen from the earth.

Eclipses are explained in terms of relative positions of the earth, the moon and the sun.

The Phases of the Moon

At any given moment, about half the surface of the moon is lit by the sun while another half is in darkness.

The lighted part is bright enough to be seen easily at night from the earth and can be seen at day time. The darkened part is usually invisible.

When we look at the moon, we normally notice only the shape of the lighted part as shown below,

Solar Eclipse (Eclipse of the Sun)

When the moon, revolving around the earth, comes in between the sun and the earth, the shadow of the moon is formed on the earth. This is called eclipse of the sun.

Sometimes the umbra of the moon is not long enough to reach the earth because sometimes the distance between the moon and earth varies (the moon’s orbit is elliptical). When the moon is further away from the earth, its disc is slightly smaller than the sun’s disc. So when a solar eclipse occurs, the moon is not large enough to cover the sun totally. A bright ring of sunlight can be seen round the edge of the dark disc of the moon. This is called Annular or ring eclipse.

Lunar Eclipse (Eclipse of the Moon) 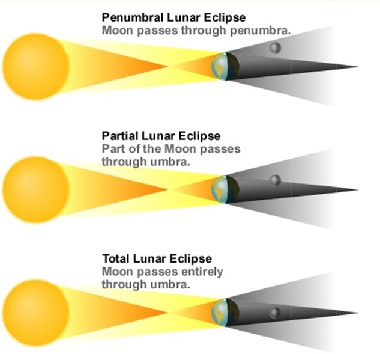 A lunar eclipse occurs when the moon passes through the earth’s umbra.

A pinhole camera consists of a box with pinhole on one side and a translucent screen on the opposite side. Light rays from an object pass through the pinhole and form an image on the screen as shown.

The image formed is real and is inverted. A pinhole camera has a large depth of focus i.e. objects that are far and near form focussed images on the screen.

Characteristics of Images Formed on the Pinhole

Consider the sets below 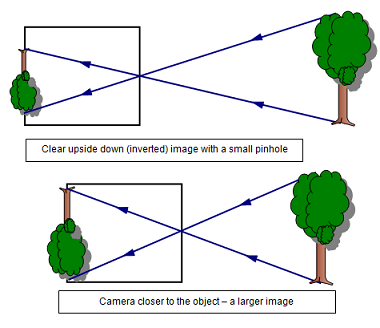 When the object is near the pinhole, the image is larger.

When the object distance is increased from the pinhole the image is smaller.

When more holes are added close to the first pinhole, images of each point are seen overlapping on the screen as shown,

Magnification, m= distance of image from pinhole (v)/distance of object from the pinhole(u)

The distance between the pinhole and screen of a pinhole camera is 10cm. The height of the screen is 20cm. At what distance from the pinhole must a man 1.6m tall stand if a full length is required

An object of height 5m is placed 10m away from a pinhole camera. Calculate

Taking Photographs with a Pinhole Camera

The pinhole camera can be used to take still photographs if it is modified as follows,

All objects, except self luminous objects, become visible because they bounce light back to our eyes. This bouncing off light is called reflection.

There are two types of reflection namely regular and diffused reflections.

When light is reflected by a plane smooth surface, the reflection is regular (specular) and when reflection occurs at a rough surface it is called a diffused reflection.

The silvered side is normally coated with some paint to protect the silver coating. If the clear and the silvered surfaces are in parallel plane, the mirror is called a plane mirror.

If the surfaces are curved, the mirror is called curved mirrors.

The silvered side of the mirror is shown by shading behind the reflecting surface.

Consider the set up below,

Incident ray – is the ray that travels from the source to the reflecting surface.

Angle of incident (i) – is the angle between the incident ray and the normal.

Normal – is the line drawn perpendicularly at the point where the incident ray strikes the reflecting surface.

Reflected ray – is the ray that bounces from the reflecting surface.

Angle of reflection (r) – is the angle between the reflected ray and the normal.

Formation of Images by Plane Mirrors

Images formed is far behind the mirror as the object is in front of the mirror i.e. image distance is equal to object distance from the mirror

A girl stands 2m in front of a plane mirror.

IMAGES FORMED BY MIRRORS AT AN ANGLE

In general if the angle between two placed mirrors is θ, then the number of images formed, n, is given by,

Mirror parallel to each other

When the mirrors are parallel i.e. θ = 0o, the number of images is given by,

A kaleidoscope or mirror scope is a device used to produce a series of beautiful symmetrical images. Two plane mirrors are placed at an angle of 60o inside a long tube.

The bottom of the tube is a ground glass plate for admitting light. On this plate is small scattered small pieces of brightly coloured glass, which act as objects.

When one looks down the tube, five images of the object are seen which together with the object form a symmetrical pattern in five sectors. 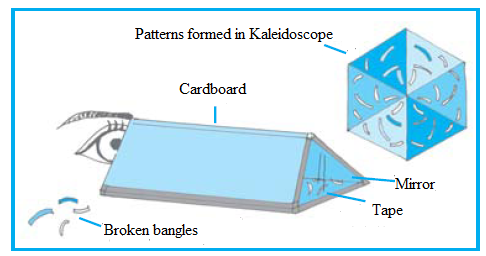 The instrument is used by designers to obtain ideas on systematic patterns.

This is an instrument used to view objects over obstacles. It is used in submarines and also to watch over crowds. The images seen with the aid of the instrument are erect and virtual.

A periscope uses two plane mirrors kept parallel to each other and the polished surfaces facing each other. Each plane mirror makes an angle of 45o with the horizontal. Light from the object is turned through 900 at each mirror and reaches the eye as shown.

The rays from the object are reflected by the top and then reflected again by the bottom into the observer. The image formed is virtual, upright and same size as the object.