To Set Up a Simple Electric Circuit

Apparatus - 1 dry cell, a torch bulb, a switch and connecting wires
Connect the apparatus as shown below,

Close the switch and observe what happens.

The bulb lights because charges are flowing through it in a given time. The rate of flow of charges (charge per unit time) is called an electric current.

The SI unit of current is ampere (A).

I = Q/t where I is current, Q is charge in coulombs and t is time in seconds.

Calculate the amount of current flowing through a bulb if 300 coulombs of charge flows through it in 2.5 minutes.

I = Q/t = 300/2.5 x 60 = 2A
An electric current circuit like the one shown above allows charges to move in a complete path when the switch is closed. This circuit is said to be closed circuit.

Copper wire readily allows electric charges (mainly electrons) to flow. The wires may be covered by an insulating material like rubber to prevent the user from electric shock if the current is too high.

The cell is the source of electrical energy in the circuit and maintains the flow of charges round the circuit.

When the gap is introduced, by opening the switch the charges stop flowing. The circuit is then said to be open (broken circuit). Loose connection of wires or components in the circuit opens the circuit.

For clarity and neatness, symbols are used in representing an electrical circuit.

The purpose of a cell/battery in a circuit is to provide energy to cause charges to flow.

This is measured in terms of potential difference (p.d) in volts. The force that pushes electrons around the circuit is voltage.

Potential difference-is the voltage measured across a cell/battery when supplying current as shown,

Electromotive force (e.m.f) It is also measured in volts.

Electromotive force is measured across a cell/battery when it is not supplying current as shown,

Electromotive force (e.m.f) is slightly greater than potential difference because some of the energy is used in drilling current across the cell itself.

The difference between electromotive force (e.m.f) and potential difference (p.d) is called lost volts. The voltage is lost because of the opposition to the flow of charges within the cell (internal resistance).

We have two types or forms of arrangement of cells

Higher voltages can be achieved since the effective (total) voltage is the sum of each voltage.

5 cells of electromotive force (e.m.f) 1.2V are connected in series. What is the effective voltage?

Current is supplied for only a short time. This is because the cells produce a higher resistance to the flow of the current.

The total voltage is equal to that of a single cell in a parallel connection.

4 cells of e.m.f 1.5V each are connected in parallel. What is the effective e.m.f?

The current is supplied for a long time since resistance is low. It produces more current compared to series connection

NOTE: The ammeter is always connected in series while the voltmeter is connected across the cells. (Parallel)

Consider the two set ups below, 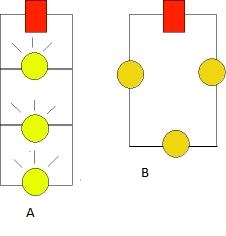 In domestic electrical wiring (lighting circuit), bulbs are connected in parallel as shown below,

The three bulbs can be switched on or off independently and if one bulb blows off, it does not affect other bulbs.

Conductors – These are materials which can conduct electricity. They allow electric charges to pass through them e.g. copper, silver and aluminium.

Insulators – These are materials which do not allow electric charges to pass through them e.g. plastic, rubber and dry wood. They cannot be used in connection of circuits.

When electrons are made to drift in a given direction, current is said to be flowing through the conductor. Current is taken to flow in the direction opposite to that of electron flow. Poor conductors (e.g. graphite) have fewer free electrons.

Insulators have their electrons tightly bound to their nuclei of their atoms. Because they cannot conduct electric current, insulators are used as cover materials for good conductors.

Semi-conductors – Their electrical properties fall between conductors and insulators e.g. silicon and germanium.

The main sources of electricity presently are chemical cells, generators and solar cells.

A chemical cell provides the energy needed to drive an electric current in a circuit. It consists of two different metals called electrodes and a conducting liquid called electrolyte. The chemical energy stored in the cell is converted into electrical energy when an electric current flows in the circuit. Chemical cells are classified as either primary cell or secondary cell.

In primary cells, chemical energy is directly changed into electrical energy. Consider the set up below, 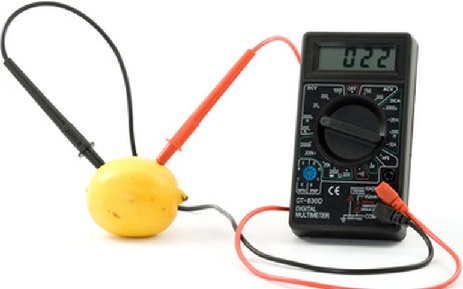 The voltmeter pointer shows a reading for a while, showing existence of an electromotive force (e.m.f) across the two plates. The voltmeter goes off after a short time.

The two metal plates used must have different rates of reaction when immersed in the lemon fruit. In this case zinc is more reactive than copper.

Simple primary cells consist of zinc and copper plates as electrodes and dilute sulphuric acid as the electrolyte in a container as shown,

Working of a simple cell

Dip zinc and copper plates into a beaker containing dilute sulphuric acid. Connect the two plates to a bulb. Observe what happens to the bulb immediately when it is connected. 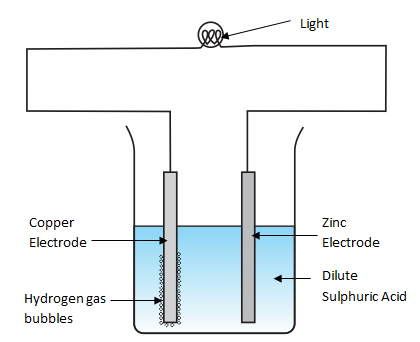 Allow the set up to run for sometime and note what happens to the bulb.

When the bulb is connected it lights brightly but dims after sometime. Bubbles form around the copper plate. When potassium dichromate is added into the container, the bubbles on the copper plate disappear and the bulb brightness is restored.

Explanation and defects of a simple cell

Polarisation can be minimised by adding a depolariser e.g. potassium dichromate. A good depolariser should not react with the electrolyte. When zinc reacts with sulphuric acid, it dissolves and exposes hidden impurities of carbon and iron. These impurities form small cells called local cells. These local cells cause the zinc to be used up even when current is not being supplied.

This defect is called local action. It is minimised by applying a layer of mercury on the zinc plate. This process is called amalgamation. In this process mercury dissolves off zinc leaving the impurities buried in the electrode. It can also be minimised by use of pure zinc. 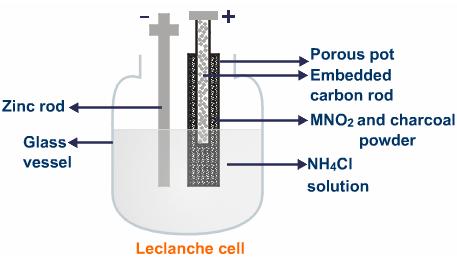 This process however is slow and hence large currents should not be drawn steadily for a long time. Carbon powder increases the effective area of plate, which in effect reduces opposition to the flow of current. The zinc plate is dipped in ammonium chloride solution, which converts zinc to zinc chloride when the cell is working.

Local action is still a defect in this cell. The cell is used for purposes where current is not drawn from it for a very long time e.g. in operating bells and telephone boxes. It has a longer life span than the simple cell. 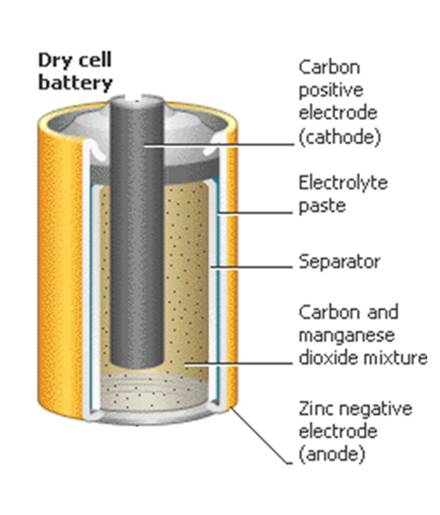 Manganese (IV) oxide and carbon powder act as a depolariser. The hydrogen gas produced is oxidised to form water, making the cell to become wet after being used up.

The zinc case acting as a negative electrode gets eaten away by ammonium chloride to form zinc chloride. Local action is still a defect in this cell. The cell cannot be renewed once the chemical action stops.

NOTE: Large currents should not be drawn from the dry cell within a short time. Shorting its terminals can also ruin it.

The cells must be stored in dry places. They are used in radios, torches, calculators e.t.c

When the cell is in use the stored chemical is once again changed to electrical energy. 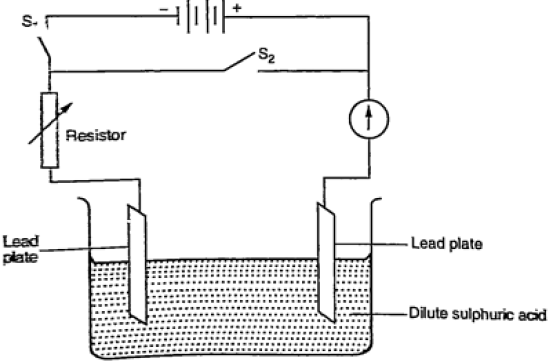 Close the switch and allow the current to flow for sometime.

The lead plate connected to negative terminal of the battery becomes coated with a chocolate brown colour. The other plate remains grey. Gas bubbles are seen on the plates.

This is the most reliable, long lasting and cost-effective of the secondary cells.

A 12V lead acid accumulator has six cells connected in series. Each cell has several plates made in the form of a lattice grid, the positive plate carrying lead (IV) oxide and the negative plates having spongy lead.

The plates are very close to one another and are prevented from getting into contact (short circuiting) by having insulating sheets separating them.

The surface area and the number of plates in a given cell determine the current carrying capacity of the battery. The charge (electrical energy) stored is directly proportional to the surface area of the plates.

The container used in the construction of the lead acid accumulator must be mechanically strong, highly acid proof with insulating properties.

When connected in this manner, chemical reactions are reversed. The density of sulphuric acid is restored. The lead sulphate is converted to lead and lead (IV) oxide. The charging is complete when hydrogen and oxygen bubbles are freely released from the plate. 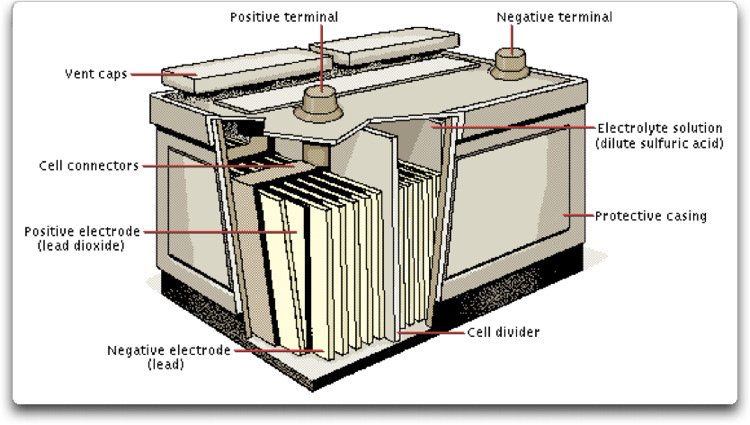 Q= It expressed in Ah.

Lead-acid accumulators give strong current over along time compared to other cells because of an effective low internal resistance.

A battery is rated at 30Ah. For how long will it work if it steadily supplies current of 3A?

The electrolyte in this case is an alkaline solution such as potassium hydroxide.

The common types are nickel-cadnium and nickel-iron accumulators.

They are used in ships, hospitals and buildings where large currents might be needed for emergency.

Click here to download the pdf version of "CELLS AND SIMPLE CIRCUITS - Form 1 Physics Notes", and read the full contents of this page