The year 2017 KCSE Geography examination was presented in two papers paper 1 (312/1) covers the physical geography and Map Reading while paper 2 (312/2) examines "Human and Economic Geography, Photographic Interpretation skills and Statistics". Each of the two papers had ten (10) questions.

This report analyses the performance of candidates in the year 2017 Geography examination papers, paying special attention to the poorly performed items It looks at what the questions tested, the candidates weaknesses and possible reasons for their poor performance. It also gives advice to Geography teachers with the aim of improving future performance in the subject.

The following observations can be made from the table above:

Despite the improved performance, some questions performed poorly and they will be discussed in the section below.

The performance of candidates in this paper slightly improved from a mean of 37.9 in 2016 to 42.21 in 2017. The paper adequately tested the syllabus and the questions were well balanced. This report will look at questions that registered poor performance, identify areas of weakness, the expected responses and general advice to teachers to improve performance.

Describe the following processes of formation of metamorphic rocks.

Describe the following processes of formation of metamorphle rocks.

Teachers should engage candidates in discussion on formation of rocks using charts that show different types of rocks and the processes that lead to their formation. Frequent exercises and quizzes will assis in the mastery of content.

With an aid of a well labelled diagram, describe the formation of antielinorium and synclonorium complex. (6 marks)

Majority of the candidates could not describe the formation of anticlinorium and syclinorium complex type of fold hence they could not illustrate the formation using a diagram. They also found it difficult to explain the effects of folding on physical environment.

With an aid of a well labelled diagram, describe the formation of anticlinorium and
syclinorium complex. 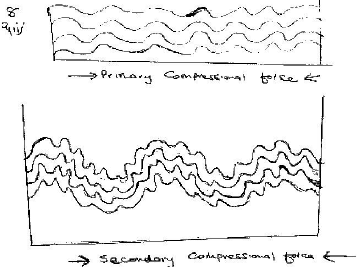 -Fold Mountains receive heavy rainfall which give rise to rivers.
-Fold Mountains cause heavy rainfall in the windward slopes and little rainfall on the leeward slopes.
-The heavy rainfall on the windward side leads to growth of thick forests.
-The process of folding created crustal weakness which triggered off volcanic activities .
-In the mountainous regions, the cold wind descend to the lowland and valleys causing frost temperature inversion.
-In the Northern Hemisphere, the south facing slopes are warmer than the north facing slopes
-Folding leads to formation of different relief features/rugged landscape/ fold mountains.

Teachers should teach this topic more keenly using illustration as dictated by the syllabus. They should train learners to draw the relevant diagrams on folding and give frequent test on the complex parts of the topic. Teachers should be able to differentiate the physical from the human environment while teaching the effects of folding.

State the significance of the hydrological cycle.(4 marks)

State the significance of the hydrological cycle

Describe how the following lakes were formed.

-A meandering river erodes the outer bank of a meander and deposits material in the inner river bank.
-This deposition continues until a narrow picce of land is left separating the two bends.
-This is eventually eroded by floods forcing the river to flow on a straight channel.
-A loop of the meander is abandoned to form an oxbow lake.

Teachers should teach this topic more thoroughly; they can integrate class discussion with use of diagrams and field excursion to enhance comprehension of studied concepts. Simplified notes can be provided coupled with frequent assessment.

Describe the following properties of soil.

Soil texture
-This is the degree of fineness or coarseness of the particles making up the soil.
-It is the size of the soil particles.
-The texture controls the size and spacing of the soil pores.
-This effects the soil water content/the drainage leaching soil aeration

Soil Porosity
-This is the amount of pore spaces in the soil.
-The size of the pore spaces determine the water flowing in the soil/sandy soils have high porosity hence allow water to pass through.
-Clay soils have few pores hence retain water.

Teachers should cover in details this topic and clarify concepts for easy interpretation and comprehension. They should practice concepts learnt by giving frequent tests and field study as indicated in the syllabus.

This report looks at question 1 a,b. 6b. 10b ii which presented some challenges in the way candidates attempted them.

Identify three counties in Kenya where wheat is grown on a large scale. (3 marks)

Some candidates failed to know the counties where wheat is grown, while others were mixed up on the climatic conditions that affect wheat growing. Some gave the conditions for growing.

Expected responses
Identify three counties in Kenya where wheat is grown on a large scale.

Teachers should practice teaching this area using atlases and give learners tasks to locate the counties, they should thoroughly teach the conditions for wheat growing under different categories. Teachers should caution learners to always read and understand the question requirement.

Draw a compound bar graph to represent the number of visitors to selected national parks in Kenya Use the scale of 1 cm to represent 100,000 visitors. (10 marks)

Most candidates could not correctly draw the compound bar graph and the segments, candidates lacked the relevant skill or understanding to draw the graph.

A compound bar graph to represent the number of visitors to selected national parks in Kenya. 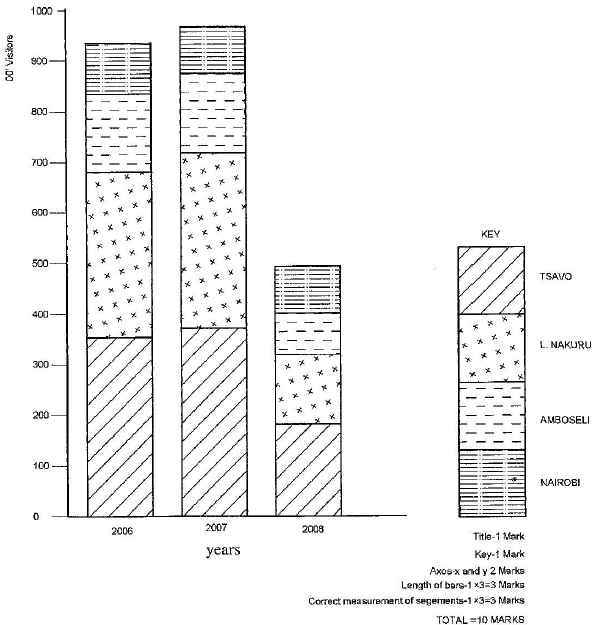 State factors which led to the growth of Kisumu as a lake Port. (7 marks)

Most candidates confused settlement patterns with population. They also confused functions of Kisumu as a port, city and urban centre.

Teachers should emphasize the coverage of the topic more thoroughly and integrate the teaching with field study for more understanding and mastery of content.