These are tools that make work easier by increasing the effort distance. 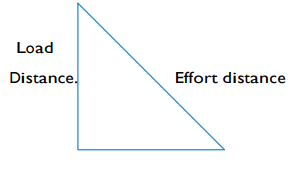 These are simple tools that make work easier by changing the direction of the force.
They are used to lift or raise load on higher surfaces. 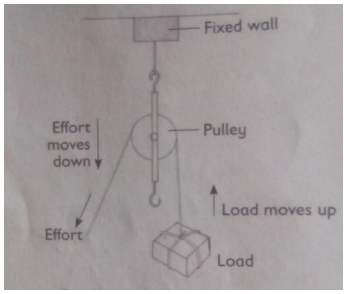 A rope or string is put along the groove. The groove prevents the rope from slipping off.

Properties of a single fixed pulley.

The law of energy conservation statesthat, energy cannot be created or destroyed but can be changed to other forms of energy.

Ways of Conserving of Energy.

Nutritional Needs For A Pregnant Or Expectant Mother

Infants are children below 2years.

The best food for them is breast milk as it is wholesome ie it contains all the nutrients required by the body.

This is the gradual introduction of semi solids foods to an infant. It is done at the age of 4-6months. Breast feeding should continue upto 2 years. Introduce one food item at a time.

This is an illness of the stomach caused by eating foods containing harmful substances.

The Meaning and Major Components of Environment

Environment describes all the things and conditions that make up our surroundings on earth.

Other water sources found in the environment is a dependent for other living things on the land e.g. animals get water from rivers, lakes, rain and dams. People also use rain water for domestic purposes. They harvest the water using tanks and drums. They also
fetch water from rivers and wells.

Without water plants can not grow well. We already know that the conditions necessary for germination are: water, air and warmth. During photosynthesis, plants use water to make their own food.

Another important component of environment is soil which makes the homes of some small animals. Plants get nutrients from the soil so as they can grow well, get water from the soil through absorption and are finally held by the soil. Also soil is important to
animals in that they feed on plants that grow on the soil e.g. zebra, cows and goats. They are called herbivorous because they feed on green plants and vegetable materials that grow on the soil. Human beings cultivate the soil to produce food crops that they eat.

Many small animals live in the soil like ants, termites, moles, groundhogs and some bacteria which decompose dead plant and animal materials.

One of the major components of the environment is air which all living things cannot survive without. We already know that air is a composition of many gases; oxygen which makes 21% of the air is needed for respiration.

Note that living things breath in oxygen and those animals that live in water get their oxygen from the dissolved oxygen in the water. Carbon dioxide in air is 0.03% which is used by plants in making their own food in presence of sunlight, a process called
photosynthesis. These plants give out carbon dioxide. It is from the atmosphere where the plants and animals on the land get their oxygen and those in water get theirs in the water.

Animals take in oxygen through breathing and give out carbon dioxide. On the other hand plants take in carbon dioxide during photosynthesis and give out oxygen. Leguminous plants e.g. beans, ground nuts and peas use nitrogen which makes 78% part
of the air to make proteins.

Another major component of the environment is plants. Trees provide shelter for some animals such as monkeys and insects. Animals get their food from plants either directly or indirectly. Plants do also hold soil together thus preventing soil erosion.
Plants give out oxygen to the atmosphere during photosynthesis and animals take in oxygen during breathing. Dead plants decay and decompose releasing nutrients to the soil making it fertile.

Some animals help in pollination such as bees and butterflies. They help in cross pollination of flowers in plants. Animals also help in seed dispersal. Waste matters from animals add nutrients to the plants and this way soil becomes fertile. Small animals like
bacteria decompose materials in the environment to release nutrients to the environment. Animal breath out carbon dioxide into the atmosphere which in turn is used by plants to make food.

The Meaning and Effects of Soil Pollution

Soil pollution is the presence of substances that affect the quality of the soil also known as land pollution. It affects the usual use of soil and is dangerous to the health of human beings, other animals and plants. In other words, soil pollution means making soil impure. We say that when certain substances are present in the soil they pollute it. Substances that make soil or other components of the environment impure are called pollutants (contaminant). Some of examples of such pollutants are plastics, polythene papers, fertilizer, pesticides and herbicides.

If oil is spilled on the soil it pollutes it. The following are some causes of soil pollution:

When soil is polluted, its fertility is affected and this too affects the soil productivity leading to the living components of the environment i.e. plants and animals getting affected as well.

Effects of soil pollution on plants

Most materials such as plastics and polythene papers do not decay. If such materials are not properly dumped, they may cause damage to leaves and stems of plants when deposited on the soil as they decay. Through this way, they interfere with growth of the plants as follows:

Soil being homes of many small animals, such as worms, ants and termites, they are negative affected when soil is affected (polluted). Some small animals like bacteria make soil to be rich by decomposing dead vegetable and animal materials. Thisis the way humus is added into the soil making it more productive. Other small animals like earthworms and millipedes dig in the soil and this allows air and water circulation in the soil. The improved soil aeration and drainage of the soil allows the roots of the plants to penetrate into the soil easily.

The presence of oil, chemicals in the soil such as herbicides and pesticides and other harmful pollutants make it difficult for the small animals to survive and when they die the soil losesits quality and lowers productivity.

Animals and plants depend on soil. Plants grow on the soil while animals feed on the plants hence they need to conserve soil. To conserve soil means to protect it from losing its natural properties and productivity. There are various methods of conserving soil. This section briefly discusses these methods.

Table 3.1: Summary of the main methods used in soil conservation

Air is an important component of the environment. Pure air is a mixture of 21% oxygen, 78% nitrogen, 0.03% carbon dioxide and 0.97% rare gases, water vapour, and dust particles. Presence of harmful substances in the air is called air pollution. The substances are called pollutants. Pollutants endanger human health and also affect other living components in the environment i.e. plants and animals. Others which arte indirectly affected by air pollution are water and soil.

Major causes of air of Pollution

Polluted air is a threat to human, animals and plant life. Also it is dangerous to nonliving components of the environment e.g. water and soil. It corrodes materials such as corrugated iron sheets and marble.

Air pollution is controlled in several ways: These include;

Soft water is water with no or little dissolved salt in it. Mainly rain water.

There are two types of water hardness, namely;

NB: The process of removing the dissolved minerals from hard water is called softening.

Adaptations of Animals to their Environment

These are mammals that feed on plants eg cow, buffalo, antelopes, elephants etc

They are classified into two, namely;

These are mammals that feeds on flesh only. They include; lions, dogs, cats, leopard, etc

These are birds which feeds on grains or seeds.
They include; chicken, doves, Turkey, pigeons,Weaver bird and quelea birds. They have a strong, short, straight, thick, blunt and cone shaped beaks for picking grains.
Their claws are adapted to scratching.

They feed on nectars.
Examples include; sunbird and humming bird.
They have a long slender and slight curved beak for sucking nectarsfrom a flower.

These birds filters their foods from mud.
They include; ducks, sea gulls, swans, geese, pelican and flamingo.
They have a flat, broad, strong and serrated (v-shaped) beaksfor sieving or filtering their foods
Their feet are webbed.

Adaptations of Animals to Movement.

Adaptations to Hopping and Leaping.

They have a powerful hind legs to enable them move forward. Some have a
short fore legs and strong hind eg kangaroo. Some also have tails for balancing.
They include; amphibians, grasshopper, locust and kangaroos.

Signs of Ill Health in Livestock.

Adaptations of plants to their environment.

Adaptations are mechanisms that enable a plant to survive in a habitat. Plants habitats include:-

Plants that are able to survive in dry area are called xerophytes.

They are called hydrophytes.

Most they grow in equatorial forests, swamps, marshes, lakes and rivers.

Plants which grow in normal soil and water conditions are called mesophytes.

These are diseases which are passed from one person to another person through sexual contact.

NB: Genital herpes and HIV/AIDS are other STIs caused by virus.

Fertilization is the fusion or union of the nuclei of the ovum and the sperm in the
oviduct/fallopian tube.

There are two types of Fertilization that takes place in the female's body. Namely;

Process of Fertilization in human beings

During sexual intercourse/coitus/copulation, sperms are introduced in the vagina by the penis.

Sperms swim in the semen using their tails until they reach the oviduct where they meet a
mature ovum.

Many sperms surrounds the ovum but only one penetrates the ovum, the nuclei of the sperm
and the ovum fuse to form a Zygote

After fertilization a woman becomes pregnant and this is called conception. NB: The sperms
which do not penetrate the ovum are killed.

The zygote then undergo cell division, travels down to uterus and attaches itself on the uterine walls, this is called implantation

After implantation, the zygote is called embryo

After implantation, the embryo develops a disc-shaped organ called placenta which joins the
embryo to the mother.

At 6weeks the embryo has formed most of the important body organs such as the
lips, nose, arms, ears, eyes, feet and toes.

At 8weeks(2months), the embryo is called foetus. The foetus is surrounded by the amnion which
contains a fluid called amniotic fluid.

Functions of the placenta

Functions of the umbilical cord.

Functions of the amniotic fluid.

NB: Gestation period takes nine months or 36 to 40weeks or 280days in human beings, this is
the period between conception and birth.

It is also called parturition.

When the foetus is fully developed, the head faces downwards and is positioned directly above the
cervix.

Stages in the birth process.

This is the removal of waste productsfrom the body.

There are 3 main excretory organs, namely;

Waste products removed by these organs are; 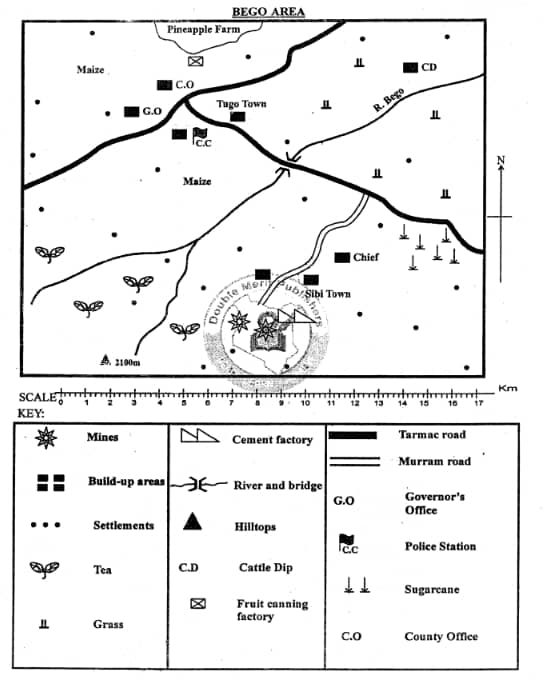 Study the map of Bego Area below and use it to answer questions 1 to 7.

The diagram below shows a marine fishing method.

Use the map of Eastern Africa below to answer questions 30 to 33. 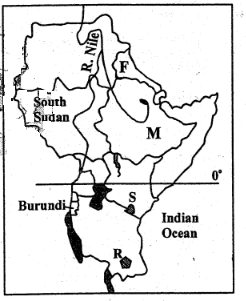