Click the button below to download the full Mathematics Form 3 Notes pdf document, with all the topics.

CLICK HERE to get "Mathematics Form 3 Notes" on Whatsapp for offline reading/ printing.

The position vector of A written as OA is

where O is the origin

Addition of vectors in three dimensions is done in the same way as that in two dimensions.

,that in the dirction of the y axis is =

while that in the direction of z – axis is =

Diagrammatic Representation of the Vectors.

Three unit vectors are written as;

in terms of the unit vector i, j and k

Magnitude of a 3 Dimensional Vector.

Distance Formula for a 3 Dimensionsional Vector

Multiplying by a Scalar

Points are collinear if one straight line passes through all the points. For three points A, B, C - if the line AB is parallel to BC, since B is common to both lines, A, B and C are collinear.

AB and BC are parallel if AB = kBC, where k is a scalar

Therefore AB//BC and point B (1, 5) is common. Therefore A,B,and C are collinear.

Proportional Division of a Line

Finding the ratio in which a point divides a line.

Points Dividing Lines in Given Ratios.

Note that QN is shown as –2 because the two line segments are MQ and QN, and QN is in the opposite direction to MQ. 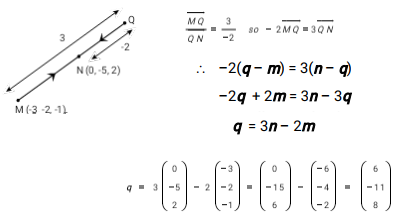 The figure below shows a point S which divides a line AB in the ratio m : n

Taking any point O as origin, we can express s in terms of a and b the positon vectors of a and b respectively.

This is called the ratio theorem. The theorem states that the position vectors s of a point which divides a line AB in the ratio m: n is given by the formula;

where a and b are positon vectors of A and B respectively. Note that the sum ofco-ordinates n/m+n and m/m+m= 1

A point R divides a line QR externally in the ratio 7 : 3. If q and r are position vectors of point Q and R respectively, find the position vector of p in terms of q and r.

We take any point O as the origin and join it to the points Q, R and P as shown below

Past KCSE Questions on the Topic

Click here to download the pdf version of "Vectors II - Mathematics Form 3 Notes", and read the full contents of this page