Click the button below to download the full Mathematics Form 3 Notes pdf document, with all the topics.

CLICK HERE to get "Mathematics Form 3 Notes" on Whatsapp for offline reading/ printing.

Length of an Arc

Find the length of an arc subtended by an angle of 2500 at the centre of the circle of radius 14 cm.

The length of an arc of a circle is 11.0 cm.Find the radius of the circle if an arc subtended an angle of 900 at the centre.

Find the angle subtended at the centre of a circle by an arc of 20 cm, if the circumference of the circle is 60 cm.

Perpendicular Bisector of a Chord

The radius of a circle centre O is 13 cm.Find the perpendicular distance from O to the chord, if AB is 24 cm.

In the figure below CD and AB are parallel chords of a circle and 2 cm apart. If CD = 8 cm and AB= 10 cm, find the radius of the circle

In the figures below, A shows a secant while B shows a tangent

Construction of a Tangent

Properties of Tangents to a Circle from an External Point

The figure below represents a circle centre O and radius 5 cm. The tangents PT is 12 cm long. Find:

Two Tangents to a Circle

Here’s how to solve it:

How to Construct a Common Exterior Tangent Line to Two Circles

For two given circles in a plane such that no one is located inside the other, to construct the common exterior tangent line using a ruler and a compass.

We are given two circles in a plane such that no one is located inside the other (Figure 1a).

We need to construct the common exterior tangent line to the circles using a ruler and a compass.

First, let us analyze the problem and make a sketch (Figures 1 a and 1b). Let AB be the common tangent line to the circles we are searching for.

Figure 1b. To the solution of the Problem 1

Figure 1c. To the construction step 3

Hence, the quadrilateral CABQ is a parallelogram (moreover, it is a rectangle) and has the opposite sides QB and CA congruent. The point C divides the radius PA in two segments of the length r2 (CA) and r1 - r2 (PC).

It is clear from this analysis that the straight line QC is the tangent line to the circle of the radius r1 - r2 with the center at the point P (shown in red in Figure 1b).
It implies that the procedure of constructing the common exterior tangent line to two circles should be as follows:

Find the length of the common exterior tangent segment to two given circles in a plane, if they have the radii r1 and r2 and the distance between their centers is d.
No one of the two circles is located inside the other.

Let us use the Figure 1b from the solution to the previous Problem 1 .

This Figure is relevant to the Problem 2. It is copied and reproduced in the Figure below on the right for your convenience.

It is clear from the solution of the Problem 1 above that the common exterior tangent segment |AB| is congruent to the side |CQ| of the quadrilateral (rectangle) CABQ.
From the other side, the segment CQ is the leg of the right-angled triangle DELTAPCQ. This triangle has the hypotenuse's measure d and the other leg's measure r1 − r2 . Therefore, the length of the common exterior tangent segment |AB| is equal to
|AB| = √(d2 − (r1 − r2)2)
Note that the solvability condition for this problem is d > r1 − r2.
It coincides with the condition that no one of the two circles lies inside the other.

Find the length of the common exterior tangent segment to two given circles in a plane, if their radii are 6 cm and 3 cm and the distance between their centers is 5 cm.

In the figure below P and Q are centres of two circles with radiir, and r, respectively. Given that r1 > r2, construct the transverse common tangents to both circles.

The angle which the chord makes with the tangent is equal to the angle subtended by the same chord in the alternate segment of the circle. 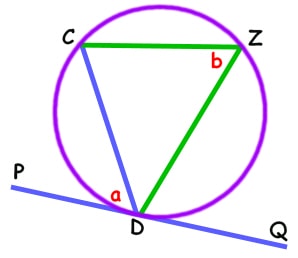 Angle a = Angle b

Note;
The blue line represents the angle which the chord CD makes with the tangent PQ which is equal to the angle b which is subtended by the chord in the alternate segment of the circle.

Past KCSE Questions on the Topic.

Click here to download the pdf version of "Circles, Chords and Tangents - Mathematics Form 3 Notes", and read the full contents of this page

CLICK HERE to get "Circles, Chords and Tangents - Mathematics Form 3 Notes" on Whatsapp